The Sinclair tries again for a liquor license 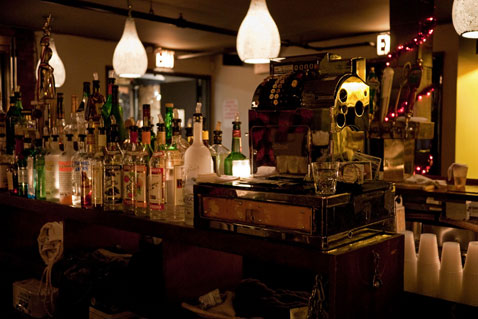 The Sinclair tries again for a liquor license

The downstairs bar at The Bowery Ballroom in New York City. The Sinclair, a concert hall and restaurant being built in Harvard Square, doesn’t yet have a liquor license. (Photo: Kevin Harber)

At this point, The Sinclair could be not only the newest and biggest concert hall, restaurant and bar in Harvard Square — but the driest as well.

The 52 Church St. site, describing as being a 525-person rock club and 104-seat restaurant, each with its own bar and entrance, has shows scheduled to start in late October, but does not have a liquor license, according to the city License Commission and state Alcoholic Beverages Control Commission.

While prevented by law from going into specifics, commission licensing program coordinator Pat Krueger said Bowery Cambridge, the local extension of New York-based concert promotion company The Bowery Presents, had to refile its request for a liquor license July 25 after its March 5 request was returned with no action taken.

“More information was sought for reconsideration,” Kruger said last week. “We’re waiting for the Department of Revenue to report.”

There is no deadline for the department’s report — although there is a lot of time between now and late October.

“There is no standard. When people come to me, I tell them it could take 12 weeks, it could take four weeks,” said Elizabeth Lint, executive director of the city’s License Commission, when asked whether it was unusual for a club to lack an alcohol license a few weeks before opening. “Some come quickly, some take longer.”

Harvard Square neighbors told the city’s License Commission they were worried about public drunkenness, and the three-member commission wound up ordering that alcohol sales end at the same time as concerts, and that the venue is to get three-month and six-month reviews.

The company was asked for comment on the refiling of the liquor license bid, but deferred comment Friday to publicist Nicole Kanner at All Heart PR. No comment was provided Friday, Monday or Tuesday morning.

The original description of The Sinclair mentioned comedy, and Rick Jenkins — owner of The Comedy Studio, atop the Hong Kong restaurant in Harvard Square — noted that Bowery is the same company that produced a Comedy Central series called “The Half Hour” at Royale in Boston. With a 525-person capacity room, “maybe we’ll be getting that ‘mid-range room’ that can bring in some well-known comics,” Jenkins said in an e-mailed newsletter.