First appeal in 2006 fatal shooting fails in court; second is in November

First appeal in 2006 fatal shooting fails in court; second is in November 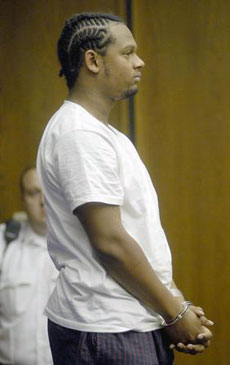 Sherrod Bright was one of three men convicted in a 2006 shooting in Cambridgeport. (Photo: Lefteris K. Travayiakis/Boston Criminal Lawyers Blog)

The men convicted in a March 18, 2006, fatal shooting in Cambridgeport are 0-1 so far in appeals. While Remel Ahart will be arguing his conviction before the Supreme Judicial Court of Massachusetts in November, Ahmad “Apples” Bright’s appeal was shut down by the court Sept. 13.

Bright was convicted in March 2009 of working with Ahart to carry out his brother’s order to kill Corey “C-Gunna” Davis, 19, shortly before midnight in what was described as a drug-related attack on a kid with an extensive rap sheet with Boston Police.

Friends and family of Ahart denied drugs were involved, gave Ahart an alibi and said the charge was crazy, since the three were friends. “The three of them had like a brotherly relationship, so that doesn’t fit, that doesn’t make sense. I’m feeling hurt that he’s being accused of basically, what, killing a friend? Come on, no, that was [one of] his best friends,” said Sheryl Jackson, Ahart’s mother, in a court date reported in the Cambridge Chronicle.

Davis was seated in the passenger seat of his black Infiniti sedan, at 136 Hamilton St., in the Cambridgeport neighborhood and shot three times in the back by Ahart, whom prosecutors said was in the back seat. Davis climbed out of the car, but got only as far as the sidewalk, where he died. He was said to be with a cousin, who lived.

A month after the attack, U.S. Marshals in Virginia arrested a Dorchester man for the murder, but it was Ahart, then 21, of Chelsea, and Bright, then 17, of Dorchester, charged and found guilty. Bright turned himself in June 2006, soon after Ahart’s arrest, and Bright’s brother, Sherrod Bright, then 26, was arrested in September 2008 and accused of ordering the hit.

Ahmad Bright was sentenced to life in prison with the possibility of parole.

Sherrod Bright was sentenced to 10 years in prison with an additional 10 years of probation.

Ahart was sentenced to life in prison without eligibility for parole.