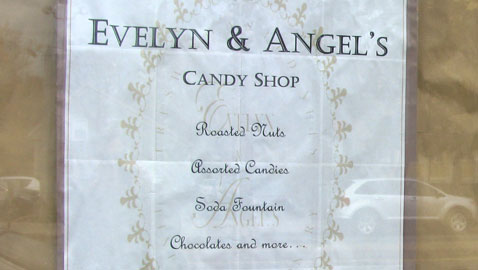 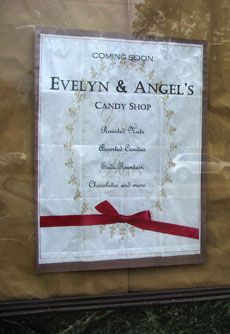 Yes, Evelyn & Angel’s Candy Shop is still on the way.

A sign went up whetting appetites in November, but the chocolate lovers who took that as a sign to start salivating have long since fainted from hunger.

“It shouldn’t be much longer,” principal Yalonda Howze, contacted Thursday by phone, promised when asked about an opening date. “By early November at the latest.”

There’s been a lot of work done inside the future shop at 1702 Massachusetts Ave., which held the Topaz gift store before it moved to Harvard Square, she said, but also a lot of work left to do. Her neighbors between Harvard and Porter Squares have been very supportive, she said, and she’s excited about the opening.

While Cambridge was once as well known for candy as it is now for high-tech innovations — its candy-making dates dates back to 1765, and Main Street was once called Confectioner’s Row, according to the Cambridge Historical Society — now only Tootsie Roll Industries remains of the old guard, making more than 15 million Junior Mints a day from its original Main Street plant. (Taza Chocolate operates at 561 Windsor St., Somerville.) Squirrel Brand Nuts’ home became apartments. Necco’s home became Novartis in 2004, and its Haviland brand plant became condos.

Boutique chocolate makers are also few and far between in Cambridge; Howze’s local competition is down to L.A. Burdick, the small chain famous for its chocolate mice, at 52 Brattle St., Harvard Square.

That may be why Howze, a Linnaean Street resident, said strangers have been tracking her down to ask when they can expect to enjoy Evelyn & Angel’s promised chocolates, candy, roasted nuts and soda fountain. “We’ve had a few inquiries,” she said.