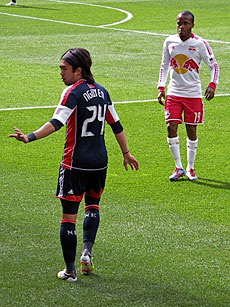 No merger or acquisition is in the works, officials promised, but the Cambridge Health Alliance could be getting a new ally: Beth Israel Deaconness Medical Center.

The Boston Business Journal said Tuesday that the health providers have signed letters of intent “to explore a potential alliance intended to improve the delivery of care.” According to the Journal’s Julie M. Donnelly,

From Beth Israel’s point of view, the deal would give the hospital system greater access to CHA’s lower-cost community hospitals at a time Boston hospitals are increasingly taking on risk for the cost of caring for patients. … CHA, which has struggled with negative operating margins over the past few years, would potentially benefit from BIDMC’s deeper pockets.

Cambridge Health Alliance operates three hospital campuses and a network of primary and specialty care practices in Cambridge, Somerville and Boston’s metro-north communities, as well as the Cambridge Public Health Department. The alliance is a Harvard Medical School teaching affiliate and is affiliated with the Harvard School of Public Health, Harvard School of Dental Medicine and Tufts University School of Medicine.

The Journal posted another intriguing story Oct. 4, saying The Kraft Group was exploring building a $130 million pro soccer stadium in Somerville’s Assembly Square — last the site of tortured uncertainty over Ikea, until the trendy, lower-cost furniture giant said last summer it wouldn’t be building a Stoughton-style superstore there.

The stadium would be the home of the Kraft soccer team, the New England Revolution. The Journal’s Thomas Grillo explained:

The Revolution play at Gillette Stadium, which has the capacity for 68,756 fans, while average attendance at a Revs home game is about 13,300. The team has been looking for a more intimate home since 2007. They first looked at the Brickbottom area, an underused industrial section of Somerville near the McGrath highway, for construction of a 20,000-seat stadium.

The book “Coffee Life in Japan” by the Boston University Anthropology Department’s Merry White, of Cambridge, got an extensive and positive review Tuesday on Huffington Post by Fabio Parasecoli, an associate professor and coordinator of food studies at the New School in New York. The book reveals the hidden world of the third-largest coffee importing country in the world “with nonchalant pleasure,” Parasecoli said, and her “affection for the world she describes is infectious. The narrative often reads like a memoir, and the author is able to transport us to places and situations that are not only described with the eye of the anthropologist, but shared with the passion of a true coffee lover.”