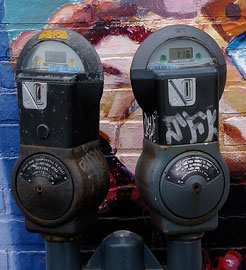 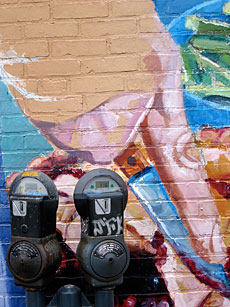 Over the weekend, the last three metered parking lots in the city — lots 4, 5 and 6 on Bishop Allen Drive — will see the old meters replaced with pay stations that let parkers pay with a credit card as well as quarters, said Ini Tomeu, the city’s public information officer.

“The 17 pay stations already in use have been well received in all locations throughout the city where they are installed. Parkers welcome the option of using a credit card rather than scrambling for quarters,” Tomeu said in a press release. The pay stations weren’t popular when they arrived in 2005, but Tomeu said recent city records show 60 percent of users paying with credit cards.

The convenience of credit cards comes with a 100 percent price hike, though: Now an hour will be $1, matching meters elsewhere in the city, all the way from 50 cents an hour. And paid hours will go to 10 p.m., an additional four hours. Susan Clippinger, director of the city’s Traffic, Parking and Transportation Department, says the city doesn’t “book increased revenues until we get them,” so it’s unclear how much money the changes will bring in. The city’s budget book for fiscal 2012 shows it expected to add $100,000 from meter collections to the previous year’s projected $4.7 million in meter collection money.

“When people use cards we’ll sometimes get more money,” Clippinger said, “but the pay stations have higher operating costs.” The use of credit cards brings communication fees for checking if a valid card is being used, software fees to send data to a server and the same swipe fees faced by retailers accepting cards as payment.

The city will have a sense of its earnings from the new rates and hours within three months, she said.

The added hours brings the lots in line with previous upgrades. In Lot 6, which is the closest to Columbia Street, parkers will be able to buy up to four hours of time, while the other lots are restricted to two hours from 8 a.m. to 6 p.m. The last four hours of metered time can be reserved at all five Central Square lots.

Use of the lots has been highest in the evenings, especially Friday and Saturday night, Tomeu said. The lots and the Green Street garage provide parking for visitors to restaurants and entertainment venues especially active in the evening.

“We want to make sure people aren’t just parking there because it’s free, but because they’re using the businesses there,” Clippinger said.

The city took away meters that accepted credit cards last year in Harvard Square, and Councillor Leland Cheung’s request to consider switching back was essentially rejected by City Manager Robert W. Healy. Councillors were told by Healy that the meters had been in place only as a test that had outlived its original end date, with that the cost of switching was prohibitive, but Tomeu’s original notice about the meters in October 2010 suggested they would stay if drivers liked them.