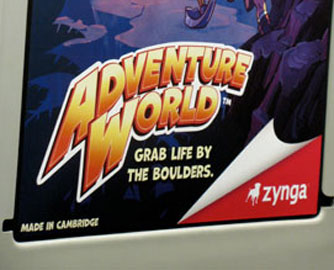 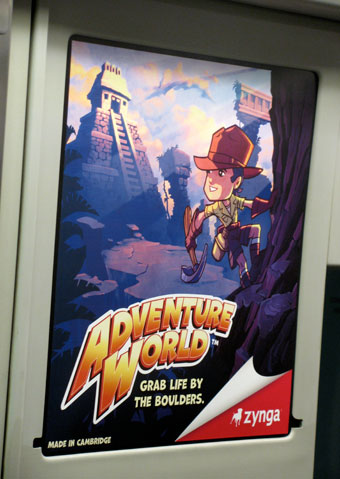 Advertisements for Zynga’s “Adventure World” were prominent on red line T cars a year ago as well as outside the Harvard Square T stop — all boasting the game was “Made in Cambridge.” (Photo: Marc Levy)

It was only a year ago video game maker Zynga was boasting that its “Adventure World” was “made in Cambridge,” but today the company — its share price plummeting — closed its local offices, laying off some 50 local employees, and retired 13 of its older games, Bostinno reported. In cutting its national staff by 5 percent, it also laid off some 50 workers elsewhere, including Austin, Texas.

“We don’t take these decisions lightly, as we recognize the impact to our colleagues and friends who have been on this journey with us. We appreciate their amazing contributions and will miss them,” Zynga chief executive and founder Mark Pincus said in a staff e-mail.

Zynga’s plans to go public and boost players led to the purchase of two local software firms, Conduit Labs and Floodgate Entertainment, over the past couple of years. But plans went awry at Zynga, which has as much bad press for management behavior and irritating, Facebook-based games as it does addicted fans looking to share their accomplishments in “Farmville” or “Mafia Wars.”

The Verge’s Adrianne Jeffries has a post explaining why Zynga, which relies on Facebook for its traffic, is in trouble:

Now that Facebook has conscripted every [casual gamer] in a position to waste hours of time clicking on a computer, Zynga has hit a ceiling.

Because casual players tend to play one uber-addictive game at at time, Zynga is now fighting competitors for the same players. The struggle for player hours is also happening between Zynga’s own games.

A Boston Phoenix profile digs into the background and plans of independent Mike “No Money” Connolly, who’s running for Democrat Tim Toomey’s House seat in the 26th Middlesex District representing parts of Cambridge and Somerville. The Chris Faraone piece explains how football and the Occupy movement changed Connolly’s life, as well as how he fares winning over Cambridge and Somerville residents who think of Toomey, in his state rep and Cambridge city councillor seats for two decades, like a member of their family.

The Center for Arts at the Armory, the historic Somerville performance venue owned by the brothers behind The Middle East rock club in Central Square, won a vital decision Oct. 17 from the Somerville Zoning Board of Appeals, the Somerville Patch reports. It will be “allowed to open earlier, close later, increase its capacity, operate a kitchen, apply for a liquor license and create outdoor cafe seating,” says Patch editor Chris Orchard. “At a public hearing held in September, a lawyer for The Center for Arts at the Armory said the venue was struggling to attract performances and events due to restrictions on its capacity and hours or operation.”

The site, bought in 2004 by Middle East owners Joseph and Nabil Sater, gets extended hours — until 11:30 p.m. on weekdays and 1 a.m. on weekends — and a boost in capacity to 495 from 395, in addition to other concessions, Orchard says.