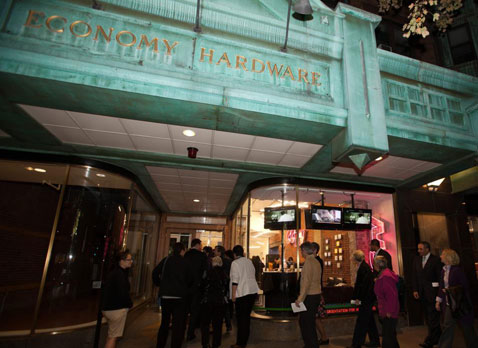 The three candidates for state representative in the 26th Middlesex District have found a location and moderator for their Oct. 30 debate, according to a joint press release.

The 90-minute debate will take place at 7 p.m. at Cambridge Community Television, 438 Massachusetts Ave., Central Square — similar to the Oct. 17 debate at Somerville Community Access Television in Union Square. The format will be the same, as well, and even the moderator is a repeat — the Somerville channel’s Joe Lynch, host of the “Greater Somerville” show. The details were explained in a Wednesday e-mail.

The district includes parts of Cambridge and Somerville.

When the idea of Lynch repeating his role was raised immediately after the first debate, Lynch laughed it off.

While the format’s two-minute opening statements went fine, as did the segment with residents’ questions, the final portion of the Oct. 17 debate was a bit wild.

“Debate is healthy … you have to have spirited debate. But you have to have guidelines, and one candidate cannot monopolize the time,” Lynch said afterward, reflecting on how candidates interrupted or dominated discussion during the third segment.

The most outspoken candidate was Republican Thomas Michael Vasconcelos, of Somerville, who’d pushed for the direct-question format in the first place. Voters will likely be watching Tuesday to see how he’ll adapt since his first impassioned performance. At 25, this is Vasconcelos’ first campaign.

The other candidates are Cambridge residents Mike “No Money” Connolly, another political newcomer, and Tim Toomey, the longtime Democratic incumbent and Cambridge city councillor.

They will answer questions posed from residents of the district in the second segment. Residents must submit questions by 5 p.m. Monday either to one of the three campaigns or by filling out this online form. Questions must be answerable by all three candidates, who will get 90 seconds to respond to each. The candidates will know the questions in advance.

The third segment — the one for which Lynch got on-the-job training Oct. 17 — lets candidates ask each other questions. The candidates will not know their opponents’ questions in advance. Questions can be phrased for one or both other candidates, but both candidates may respond. The candidate asking the question may also give his own response. If a question is posed to a particular candidate, that candidate is allowed the last word before moving on. There are no time limits in this segment.

The debate will be broadcast live on CCTV, which is Channel 8 in Cambridge. Tickets for attending the debate in person are available through the three campaigns. Due to space constraints, tickets are very limited. Members of the press who would like to attend the debate should likewise contact any of the three campaigns.