Burns’ talks about his epic music project on WMBR-FM at 3 p.m. 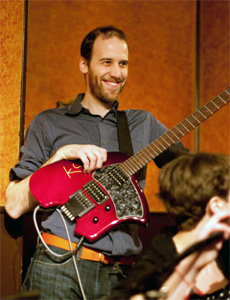 Burns’ talks about his epic music project on WMBR-FM at 3 p.m.

The “New Edge” program on WMBR-FM brings in musicians Brendan Burns and Tony Leva today at 3 p.m. for an interview and live performance.

Burns and Leva will likely have stories about the August fire in Central Square that left them and some 10 other performers briefly homeless, but the main topic is “TimeStamp,” Burns’ collaborative project premiering Monday at the Somerville Theatre in Davis Square.

To create “TimeStamp” — a movie and album — Burns brought in friends and colleagues with whom he has been playing and improvising for years. They spent three days in the theater in February crossing musical genres and making what Burns calls “an audio photograph of Boston’s musical community.”

Exploring the project with Burns and Leva will be host Ken Field, the saxophonist, flautist and composer playing with the modern music ensemble Birdsongs of the Mesozoic and improvisational brass band Revolutionary Snake Ensemble. (Field’s biography shows compositions for film, television and dance, including more than 20 segments for “Sesame Street.”)

The show runs from 2 to 4 p.m., with Burns and Leva scheduled to come on at 3 p.m. WMBR, the Massachusetts Institute of Technology radio station, is at 88.1 FM.

Tickets for the 8 p.m. Monday “TimeStamp” show are $15 and available here.