After the election: Enough with the Grand Old, Scared, White, Crazy Grandparty 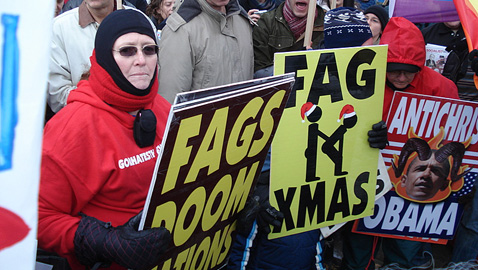 After the election: Enough with the Grand Old, Scared, White, Crazy Grandparty

Members of the Westboro Baptist Church face a counter protest in Chicago in 2008.(Photo: Michael Lehet)

A Florida recount and Supreme Court decision gave George W. Bush the presidency and a four-year taint of illegitimacy, but in 2004 it was time to face it: No matter how much Democrats might shake their heads, America reelected Bush and as a nation owned the next four years he spent in office.

Republicans got what they wanted, and it was so awful that invoking President Bush has less appeal to the party than Democrats praising President Jimmy Carter.

Maybe that’s what conservatives can cling to over the next four years: the expectation of a disastrous second term for President Barack Obama that will deliver the next election and give them the pride of knowing they were right about Mitt Romney being the better person for the job.

Either way, conservatives should own the fact that America reelected President Barack Obama.

It wasn’t a landslide — it was tight, pretty much like most of our recent top elections — but it was almost exactly what Nate Silver, Talking Points Memo and other essentially nonpartisan pollsters predicted, state by state, calculated by algorithms from polls done out in the open and available to all. If this was voter fraud, it was the biggest voter fraud ever and included billions of people who followed perfectly the scripts of fake polls taken by dozens of companies across the political spectrum going back months or years.

And while there’s no doubt the most aggrieved and paranoid of people can sustain that delusion until the 2016 election (or at least until the midterms), all that’s really going on here is that it’s morning in America and conservatives are regretting the night before. If their fiscal and political message is going to get through, it can’t keep on being couched in incoherently intolerant rhetoric.

This is about the national party, of course. Local Republicans and conservatives are not the ones espousing such hatred, with Thomas Vasconcelos — the 25-year-old Somerville resident running for state rep against Tim Toomey — being an example the wider party should follow, especially in terms of respect for gay people.

But a national Republican party led by the tea party, big-dollar extremist donators and Fox News is at most a generation away from irrelevance, and that should be taken most literally with a party whose most visible faces and loudest voices are exactly like the ones we hesitate to invite to our dinner tables and have to forgive to our friends and extended family: angry, scared and entitled old people who don’t understand that things change and not everyone is like them and that these things are okay.  Grandpa Limbaugh calls Sandra Fluke a slut because she takes birth control, Grandpa Clint carries on a bitter, meandering conversation with an empty chair and Grandpa T. Party thinks it’s hilarious to send around Photoshopped images of the president as an African witch doctor or wear T-shirts urging people to “put the White back in the White House.” Cringe.

The crazy grandpas have lots of beliefs about women, contraception, abortion and rape, which boil down to rape being part of god’s plan and abortion therefore being bad even in the case of rape, even though god has also given a woman’s body mysterious and scientifically unproven powers to keep a rape pregnancy from occurring. But there were political losses Tuesday for everyone from Todd Akin (of “legitimate rape” fame) and Richard Mourdock (with the “god’s plan” theory) to Steve King (who never heard of a woman becoming pregnant from rape or incest) and Roger Rivard (who twice tried to give a reasonable explanation for recounting his father’s advice that “some girls rape easy”).

The crazy grandpas have lots of beliefs about gay people too, and how giving them equal rights somehow diminishes straight people, but as of Tuesday the country has its first openly gay senator in Tammy Baldwin and same-sex marriage rights gained in Maine, Maryland, Minnesota and Washington.

The crazy grandpas hate immigrants and minorities, and therefore seem to suspect that all minorities are immigrants and that all immigrants are “illegal,” and hate them so much that even though they belong to a party arguably willing to do anything to win (including the dirty tricks of Lee Atwater back in the 1980s to the invention of voter fraud as an issue in 2008) they can’t bring themselves to embrace the obvious demographic fact that there aren’t enough angry, scared old people or even easily angered and scared young white people to keep winning elections as they have since Nixon and Reagan.

This is all obvious, but conservative pundits seem to just be waking up to this with Obama’s second-term win as the crunching sound of long-planned construction outside their window.

“I think Republicans have done a pathetic job of reaching out to people of color, something we’ve gotta work on,” says Mike Huckabee on Fox. “We have to be honest with ourselves that we have a problem,” says John Barabender, who worked on Rick Santorum’s campaign. And Dick Morris, who keeps getting work despite never being right — and who predicted “a Romney landslide” — says “The key reason for my bum prediction is that I mistakenly believed that the 2008 surge in black, Latino, and young voter turnout would recede in 2012 to ‘normal’ levels. Didn’t happen. These high levels of minority and young voter participation are here to stay. And, with them, a permanent reshaping of our nation’s politics.”

“This isn’t your father’s America,” Morris says, and he’s right, but it’s also not our grandfathers’ America. (Which is getting into weird territory, since many of our grandfathers were immigrants.)

It’s a lot to think about, but conservatives have two to four years to grapple with it. 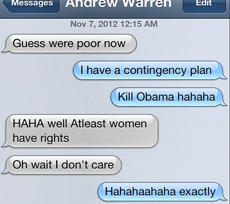 If they still resist, they can put their hopes in the fact that there are still a bunch of young, rich white men around who like the entitlement of their angry grandfathers and are willing to engage in arrant doucherie in pursuit of retaining it. “I have a contingency plan” to keep from being “poor,” texted teen billionaire Peter Brant II to a friend in a thread noted on Jezebel. “Kill Obama ha ha ha.” 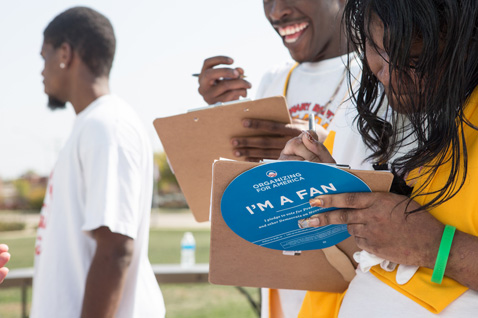 To break it down: Women make up 53 percent of the overall electorate; the young are 19 percent; black voters are 13 percent; Hispanics are 10 percent; gays are 5 percent. (The quotes below are verbatim from the sources linked to in the boldface identifier.)

Female: Unmarried women backed the president by an incredible 38 percentage-point margin over Romney, a statistic which was one of the most striking of Tuesday night.

Gay: An exit poll published the day after the election found 5 percent of voters self-identified as gay, lesbian and bisexual and more than three-quarters of them cast their ballots for President Barack Obama.

Young: Voters from ages 18 to 29 represented 19 percent of all those who voted on Tuesday, according to the early National Exit Poll conducted by Edison Research. That’s an increase of one percentage point from 2008. Obama captured 60 percent of the youth vote, compared with Mitt Romney’s 36 percent.

Hispanic: According to exit polls, 10 percent of 2012 votes came from self-identified Hispanics, and they delivered a crushing 71-27 percent edge for Obama over Mitt Romney.

Black: Hilary O. Shelton, NAACP Washington bureau director and senior vice president for advocacy, told NewsOne exclusively, “We are very excited to see the strong African-American voter turnout in the election, which exceeded participation in 2008, especially among African-American youth between the ages of 18-24. While we are still gathering the numbers, initial figures show that group continues to be the largest participating demographic. In fact, the numbers appear to exceed 2008, which were historic at that time.”