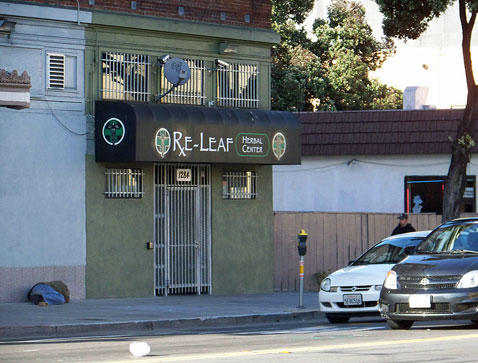 A pot dispensary in San Francisco may look like a cautionary tale to some in Cambridge as Massachusetts prepares for its own medical-marijuana law coming into effect Jan. 1. (Photo: Bob With) 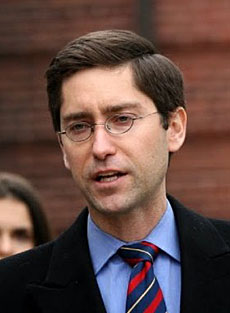 While it was a Colorado law firm helping pass medical-marijuana laws, setting up a Boston office to deal with the results in Massachusetts and running the first seminars on setting up dispensaries, a Cambridge firm looks to get in on the action.

Hill Law, a Thorndike Street firm opened by Charlestown resident Daniel Hill since 2008, is offering a model zoning bylaw that can be adapted and adopted by communities scrambling to catch up with a law approved by voters Nov. 6 and being implemented Jan. 1, a mere eight weeks later.

Plenty of communities are already moving to restrict or even ban the marijuana “treatment centers,” with Wakefield and Reading seeking to keep them out entirely and Quincy planning zoning restrictions to keep dispensaries at a distance from schools and residential areas. A report Thursday in The Cambridge Chronicle shows Cambridge councillors as saying the law is too new to act on and Police Commissioner Robert C. Haas sounding wary of how the law will make interactions between police and drug suspects “more complicated … officers will be burdened with trying to determine the difference between legal and illegal drug markets within the gray area that has now been created.” Somerville officials are already getting calls about opening dispensaries, it says, and readying legislation to answer them.

Meanwhile, the free market — informed by experience in the 17 other states where marijuana dispensaries are legal — is racing ahead to Jan. 1. In addition to law firms such as Hill and Vicente Sederberg setting up offices and websites and readying for an influx of pot-related cases and advisory roles, a company has set up shop in Natick to sell the technology needed to run treatment centers. The Boston Globe reported Tuesday that Medbox would be demonstrating its wares the second week in January.

The law approves 35 dispensaries statewide, with at least one and no more than five in each county.

Dealing with “marihuana” via zoning

Hill Law’s proposed zoning is realistic about the concerns, even in its hometown, where the 73 percent of voters in favor of the law was 10 percentage points higher than the state average. It reminds officials that “municipalities have a variety of options for restricting the locations of facilities. Regardless of how restrictive a municipality chooses to be, it will probably want to allow facilities only by special permit or site plan review (as opposed to ‘by right’), to allow for a meaningful administrative review,” it says.

“Massachusetts communities have faced similar pressures from controversial land uses in the past, often the result of new legal rulings or the adoption of new laws that permit what was previously forbidden, including cell towers, adult entertainment, tattoo parlors and mixed-income housing immune from local zoning,” noted Hill, who ran as a Democrat for a state Senate seat in 2010.

The suggested bylaw — complete with notes and tidbits such as the fact the drug is actually “marihuana” in the pertinent chapter of Massachusetts General Laws — is meant to “fold into” an existing zoning bylaw, Hill said, and “doing so will require a substantial amount of tailoring. As such, a municipality should not simply adopt it verbatim.”

In an implied plug for his own boutique firm, Hill suggested that “communities consult with competent land-use counsel on how to best incorporate the type of regulatory framework proposed here into their existing legal structure.”

The suggested zoning has detail both obvious and intriguing, including:

The zoning is here as a PDF.

Update: A policy order asking for a look at the marijuana law’s impact on Cambridge, and possible zoning to deal with it, has been added to the agenda for Monday’s meeting of the City Council by councillor Craig Kelley.