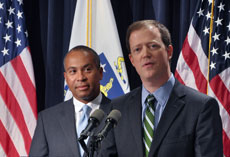 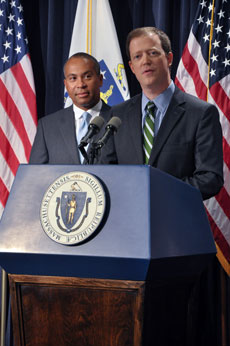 Gov. Deval Patrick and Department of Transportation Secretary and Chief Executive Richard A. Davey are to be in Somerville on Tuesday to mark the kickoff of the green line extension project. (Photo: Office of Gov. Patrick)

Giving some assurance that the green line extension project is indeed taking place, state officials plan to gather Tuesday in Somerville for an official Phase I construction kickoff event.

Among those coming are Gov. Deval Patrick, Department of Transportation Secretary and Chief Executive Richard A. Davey and former Somerville mayor and now U.S. Rep. Michael Capuano, hosted by current Mayor Joseph Curtatone, according to an announcement e-mailed by the department’s GLX Team.

The kickoff is at 1:30 p.m. Tuesday at 180 Somerville Ave., Somerville, by a Target just outside Union Square.

Once expected to be done in early 2015 with rail all the way to Route 128 through Somerville and Medford, delays in the green line extension project pushed completion to as late as 2020 but only as early as 2018.

Phase I of the extension project tears down a Massachusetts Bay Transit Authority-owned building at 21 Water St., East Cambridge, to make way for “the eventual” extension of tracks from Lechmere Station; and reconstruction of the Harvard Street railroad bridge in Medford and Medford Street railroad bridge in Somerville to accommodate commuter rail and green line tracks. The price tag for the work, to be done by Barletta Heavy Division, is given as $12.9 million by the department.

The coming of the green line to Union Square is key to the area’s revitalization, as described in September.

In full, the green line extension project moves the Lechmere stop to the NorthPoint development side of Monsignor O’Brien Highway; adds a one-stop spur to Union Square in Somerville, roughly where Prospect Street and Webster Avenue meet; and lengthens the line through Somerville into Medford, including to Brickbottom, Gilman Square, Lowell Street, Ball Square, College Avenue and finally to Route 16, to a site near the Starbucks, Whole Foods Market and U-Haul depot. Officially, after a first announced delay, all but the outermost stop were to be built by October 2015.