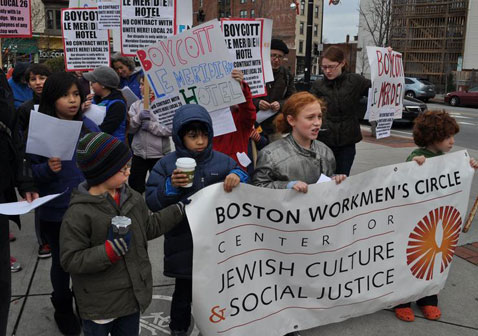 Some 150 parents and children, led by the fifth-grade class of The Workman’s Circle’s Jewish Sunday School, were to protest at Le Méridien Hotel on Sunday, followed by a religious leaders’ protest Wednesday.

Interfaith leaders will meet with Le Méridien Hotel management at 1:30 p.m. today to announce their boycott of the hotel until workers are respected, said Steve Crawford, a publicist for Local 26 of the Unite Here labor union.

“The will voice their concern for workers’ treatment. They will tell management that they will not use the hotel until workers are respected,” Crawford said in a press release.

The interfaith leaders – including leaders from Judaism, the Friends Church, the Congregationalist Church, the Unitarian Universalist church and the Episcopal Church – also intend to pray in the hotel lobby, he said.

The protest, organized by the Mass Interfaith Committee for worker justice and the New England Jewish Labor Committee, follows a protest Sunday with some 150 parents and children, led by the fifth-grade class of The Workman’s Circle’s Jewish Sunday School.

Workers called Oct. 11 for a boycott of their own employer and appeared the next Monday before the City Council, where a ban on holding city events was affirmed unanimously by councillors. The job action results mainly from a reduction in work force to 70 from 100, leading to what workers have called “crushing workloads” when HEI Hotels & Resorts took over management at the hotel in 2007.

The dispute stems from the wishes of some workers to take a vote to see if a majority want to join a union, and their desire for management to first promise officially it will not harass or intimidate workers into rejecting a union or even refusing to vote.