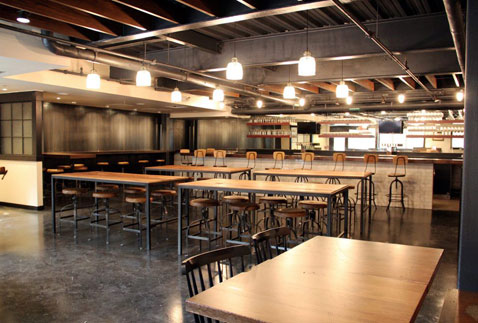 The dining area at The Sinclair in Harvard Square seats 104, and in better weather there will be outside dining, management has said. (Photo: The Sinclair)

With a liquor license in place after two tries and the stage occupied amid repeated stumbles between an announced Oct. 30 opening and the actual Dec. 12 premiere, The Sinclair saw its its final component fall into place with the full opening of Michael Schlow’s 104-seat restaurant.

The kitchen is open seven days a week from 5 to 11 p.m., management said on Facebook, with drinks served until 1 a.m. Sundays through Wednesdays and until 2 a.m. Thursdays through Saturdays.

The main menu includes $5 and $6 snacks, including homemade potato chips and creamy chicken liver puree; small plates, ranging from $7 macaroni and cheese and “disco fries” with chorizo sausage, poblano pepper and cheese sauce to $11 grilled octopus; and entrees from $12 (a spice-rubbed pork sandwich and burger) to a $21 steak frites plate. There are also lunch and late-night menus, which ups the cost of steak frites to $23 but also offers a $9 poutine.

Schlow moved to Boston from New York in 1995 and has owned and operated Radius, two Alta Stradas, Via Matta, Happy’s Bar & Kitchen and Tico. His chef de cuisine at The Sinclair is Marcellus Coleman, who “worked closely with Chef Schlow to develop the eclectic menu at The Sinclair’s restaurant, an American kitchen with gastropub influences,” managers said. “With small and large plates, plus dishes intended to share with the whole table, diners will be able to choose to eat anything from a light snack to a full meal.”