As blizzard ends, cars return to streets and T stays down through weekend (update) 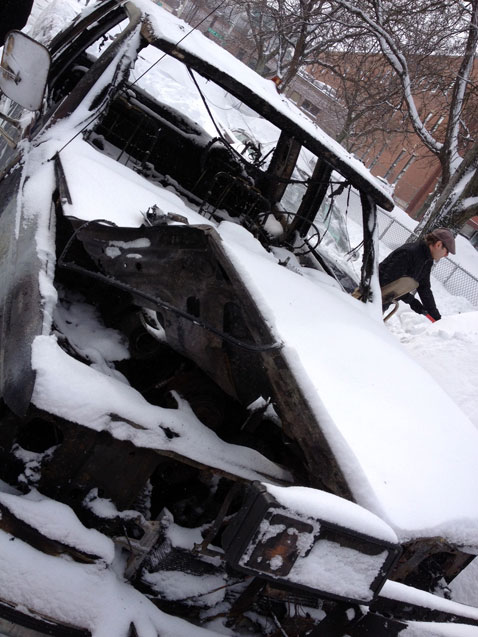 As blizzard ends, cars return to streets and T stays down through weekend (update)

The state of emergency brought on by a Friday blizzard is to be lifted at 4 p.m. Saturday, Gov. Deval Patrick said, with cars able to return to streets at that time but parking bans staying in effect. Cambridge and Somerville got an estimated 26 inches of snow and Somerville 28 based on National Weather Service reports. It means a continuation of a parking ban until 7 a.m. Monday and no classes or extracurricular activities at public schools for the day, according to city and school district websites.

The MBTA brought back “limited” MBTA and bus service at 2 p.m. Sunday “with a goal of restoring [full] service on Monday,” officials said. “The MBTA apologizes for any inconvenience this may cause. We ask for the public’s patience and understanding as we combat the effects of this storm … This continued suspension of service allows MBTA and MBCR personnel to concentrate all of their efforts on getting the transit system, from subway to bus to commuter rail, up and running as soon as possible.”

While Nstar said some 244,430 customers were without power Saturday – about 21 percent of the utility’s total customers – Cambridge and Somerville were said to be unaffected.

The forecast for Saturday night was for mostly clear skies with a low around 8 degrees Fahrenheit and wind chill values as low as -3. There could be gusts of wind as high as 34 mph, the weather service warned. Another storm may arrive Monday.

To get cars back on the road, city plows were hard at work – but the accumulated snow defeated some. Resident Jean Cummings spotted a private plow stuck in snow on Essex Street, where the driver gunning the stressed engine “until the car burst into flames.”As of 3 p.m., efforts to tow it had failed. She took a photo:

“It’s sitting there blocking Essex Street, looking like a scene out of the Left Bank,” Cummings said.

Resident Derek Hixson was inspired to take time lapse video of snow accumulating out his apartment window, taking a picture about once every half hour for about 24 hours:

This post was updated Feb. 10, 2013, with snow estimates for Cambridge and Somerville from the National Weather Service.