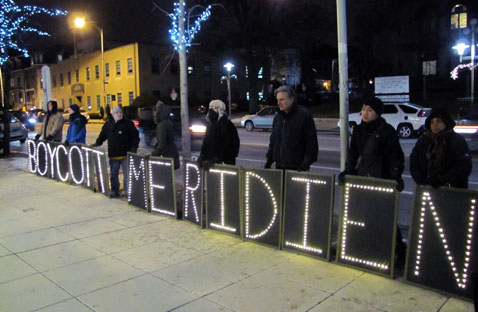 The worker actions against Le Méridien Hotel begun in October continue, with a protest set for 4 p.m. Wednesday, organizers said.

This time, hotel workers will stage a mock health clinic, complete with doctors, nurses, medical students and a health van, “to draw attention to their poor working conditions and inability to access affordable health care,” said Steve Crawford, a publicist for Local 26 of the Unite Here union.

Workers called Oct. 11 for a boycott of their own employer and appeared the next Monday before the City Council, where a ban on holding city events was affirmed unanimously. Councillor Ken Reeves said problems at the University Park hotel resulted mainly from a reduction in work force to 70 from 100 when HEI Hotels & Resorts took over management in 2007. The boycott goes on, as well as occasional actions including a protest in early February outside City Hall.

Part of the clash involves a bid to hold a process to see if workers want to unionize. Organizers want management to sign an official declaration it will not harass or intimidate workers into rejecting a union or even refusing to vote; management defines the issue differently, saying they want a different kind of vote than Unite Here is asking.

Unionization, if achieved, “would allow workers to negotiate for reduced workloads and increased staffing levels, as well as give them access to $12-per-week family health care coverage through Unite Here Local 26’s health fund,” Crawford said. The final point is the inspiration for Wednesday’s activity, which was planned to include not just Le Méridien staff but doctors, medical students and members of the Massachusetts Nurses Association and the Massachusetts Coalition for Occupational Safety and Health.

Le Méridien is at 20 Sidney St., near Central Square.