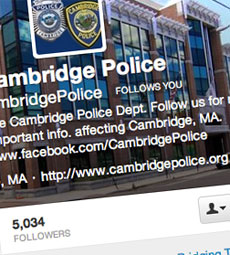 A Cambridge police alert program is changing to give more specific information, said Dan Riviello, director of communications and media relations for the department.

“After hearing from followers who raised concerns over street name locations being too broad and suggesting other minor edits, the department has updated its program,” Riviello said in a press release.

Since Feb. 19 police have been tweeting in more or less real time to report items around the city of concern to police. Now those tweets – all using the hashtag #CambMA – will give more specific address information, down to the 100 block of a call, he said.

Date and timestamp information has also been shortened to use fewer characters, and capitalization has been minimized, he said.

Tweets will still consist of a time stamp, the type of incident, and will also contain the language “report of possible” at the beginning of each tweet. This is used to indicate that the call dispatchers received was reporting a possible crime which may or may not be confirmed upon officers’ arrival.

The automated tweets “have generated interest from other departments in the region and across the country,” Riviello said. “Since the launch of the program, the department has gained nearly 1,500 new followers, helping the department reach a follower count of over 5,000.”