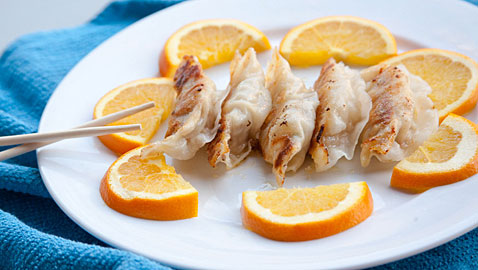 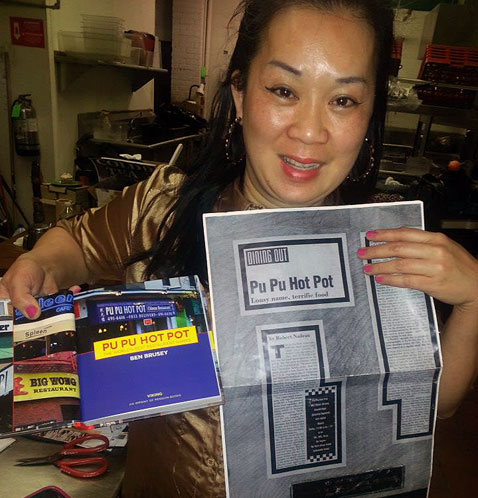 Patty Chen, chef at Pu Pu Hot Pot and the upcoming Dumpling Room, shows off some reactions to the current restaurant’s name.

Say bye-bye to Pu Pu Hot Pot. After 20 years in Central Square serving classic, inexpensive Chinese food,  providing material for Yelp debates and even inspiring a coffee table book of restaurants with funny names – Ben Brusey’s “Pu Pu Hot Pot: The World’s Best Restaurant Names,” published in the U.K. in October and due for a U.S. paperback edition in June – the eatery is changing names and menus this summer.

The change should come in June, with the 907 Main St., Central Square, location remaining but the family of co-owner Patty Chen leaving with the “Pu Pu” name and concept.

“We don’t want to be a Chinese restaurant in Central Square. It’s more profitable to be a late-night business with a limited selection, with beer and wine,” said Shulman, who’s also gearing up for the end of the couple’s nearby 12-year-old nightclub, The All Asia Bar at 344 Massachusetts Ave., and the launch of Prospect Lounge, a larger, fancier club he’s opening with Chen across the square on Prospect Street.

The nightclub move has been slow; Shulman has been planning it since December 2010 but spent most of the next two years working toward a minor but necessary zoning change. Even as the council approved the change, partners dropping out meant a shortfall in funding.

Expiring Sunday, the resulting Indiegogo campaign for $80,000 to put toward a sound and recording system “wasn’t that successful,” Shulman said. But it provided “a lot of information for people who wanted to invest” separately – enough so a formal application to open Prospect Lounge was filed with the city last week, Shulman said.

That puts Prospect Lounge on schedule to open in late summer, he said.

The Dumpling Room is taking less time to come together.

While “we’re just formulating the menu now” for a June opening, Shulman said, he knows The Dumpling Room menu will be exactly what it sounds like – focused almost entirely on dumplings with other items possibly joining them later. The restaurant will start out staying open until midnight and seek a license to stay open until 2 a.m., along with pursuing a beer and wine license.

“I’m so excited to cook for people on a smaller scale and share my knowledge about Taiwanese cuisine,” Chen has said of the upcoming Dumpling Room.

Brusey won’t be the only person whose life will be a little less rich with the loss of Pu Pu Hot Pot. When he stumbled across Pu Pu Hot Pot in 2007 during a visit to Harvard, it “was surrounded by tourists gleefully taking pictures,” he said on his Tumblr. “We all giggled. The sign didn’t seem to hint for a second at the double meaning – a steaming bowl of delicious poop. But they must know, we thought. They’ve got to know.”

The owners embrace the controversy, if that’s what to call it. Chen has posed for a photo flaunting not only Brusey’s book, but a long-ago review with the headline “Lousy name, terrific food.”

Online reviews tend toward the negative, balanced out by those who credit Pu Pu not just with having cheap, unpretentious eats and friendly service, but by some who outright love the food.

“I am a huge foodie and I like eating at Pu Pu Hot Pot! Sure the name is weird and the food is a little greasy, but they have some gems on the menu,” said a Cambridge Yelp user identified as Aileen W. “For example, their peking ravioli are homemade, thick-skinned dumplings that you can order steamed or fried. Absolutely delicious!”