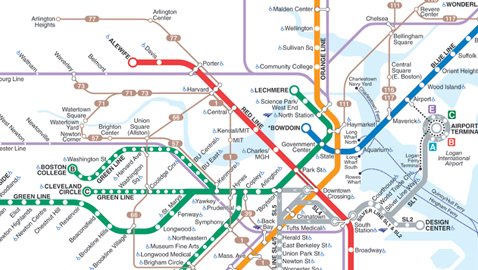 Artist Dave Ortega has an entry for the “New Perspectives” T Map Challenge, in which the Massachusetts Bay Transit Authority asks graphic designers and artists to make a better mass transit map than the one being used systemwide.

His design, posted Monday on his Tumblr, makes the T system look more orderly and airy, provides geographic scale, adds significant green spaces and identifies some waterways and landmarks. In his version Boston Harbor leads to the Charles River, for instance, and along one chunk of the river is a green stretch marking (and labeled as) The Esplanade that is obviously accessible from the Charles/MGH stop on the red line. 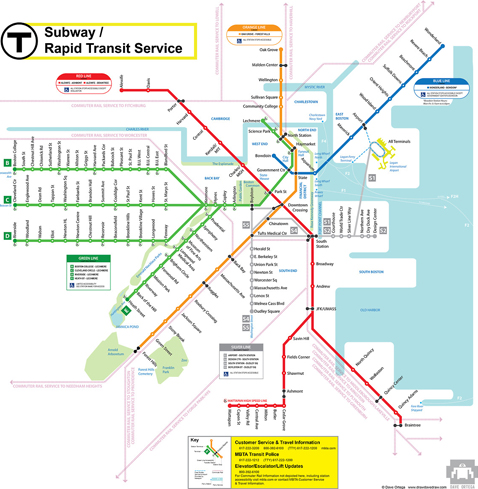 And the T’s current map: 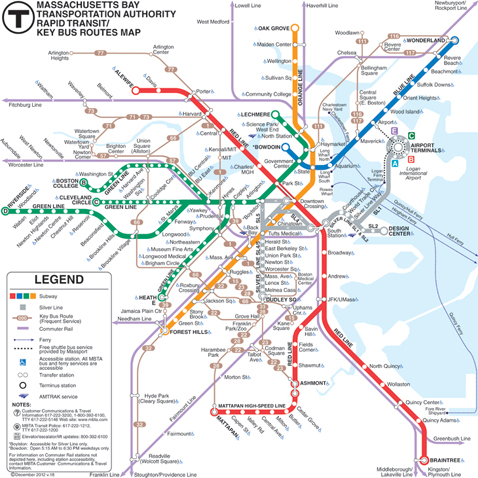 Ortega won’t be entering the T’s contest, though.

“Creating something and then surrendering copyright is tantamount to work for hire,” Ortega said. “With this contest, the T wants work for hire … for free. Even the perpetually cash-strapped T can throw a bone to graphic designers that need to put in at least a weekend of work to make something look decent.”

The contest rules say “all submissions shall become the sole property of the MBTA,” whether they win or not, and that the winning work will be displayed on its website and in its building at 10 Park Plaza, Boston. The contest, described as part of the May 12-18 National Transportation Week, accepts submissions through May 14.

Ortega, a participant at the Massachusetts Independent Comics Expo who has worked with Boston Free Radio, had a show called “Too Many Truths Spoil the Myth: New Work by Dave Ortega” at Lesley University’s Marran Gallery from Oct. 30 to Dec. 1.

He suggested the T could at least give the winner a pass for free ridership for a year.