City dance party numbers may have doubled to 10,000 this year 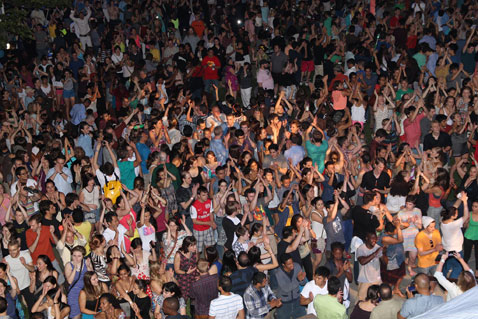 City dance party numbers may have doubled to 10,000 this year

The city’s annual Dance Party may have drawn up to 12,000 people to in front of City Hall on June 28. (Photo: City of Cambridge)

The city has raised its official count of attendees at the June 28 annual Dance Party at City Hall to 10,000 to 12,000 people – more than doubling the previous 5,000-person count given from past events.

The dance was threatened by bad weather, but when perfect, hot weather persisted, the closed-off section of Massachusetts Avenue between between Inman and Bigelow streets filled in between 7 and 11 p.m. and dancers took to the lawn and steps of City Hall.

Among the 100-person conga lines and spotlit dancers, people who planned to meet at the event might never find each other in the madness, attendees said. The Cambridge police log and tweeted alerts showed no incidents resulting from the packed dance, though, prompting resident Ernesto Gianola to marvel to police, “I don’t know how you guys did it. Good job.”

One theory as to why numbers swelled this year to possibly the largest since the annual parties began in 1996: People didn’t get their fill celebrating the end of Section 3 discrimination from the federal Defense of Marriage Act on June 26 at City Hall.

People took to social media after the Friday party to talk about the fun they had, with more than one suggesting one dance party was needed each summer month – even with a $1 cover charge – and one visitor from out of town, Quincy resident Alexa Reed, suggesting to the city that keeping the cordons at a single block made the dance “Too crowded. You should block off a bigger space next year and spread the speakers out.”