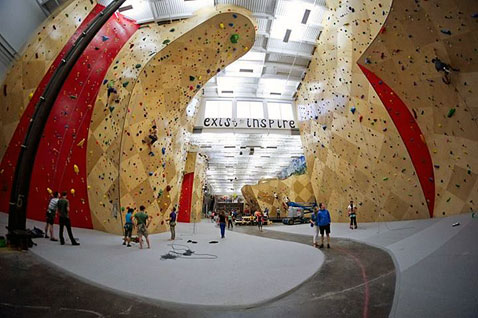 Brooklyn Boulders Somerville is in the midst of a four-day grand opening near Union Square. (Photo: Andrew Ching)

Rock climbers have another two full days of free use at the newly opened Brooklyn Boulders Somerville, the 40,000-square-foot climbing club – combined, uniquely, with innovation office space – near Union Square in Somerville.

Based on a similarly eclectic facility in Brooklyn, N.Y., the site at 12A Tyler St. tilts toward the athletic with 25,000 square feet of climbing wall, slacklines, workout and weight rooms, a yoga studio, pro shop and fitness programs and personal trainers. But there’s also a bit of co-working space, a conference room and event rooms and some crossover space with saunas, lounges, a gallery, a café and pop-up shops on the way.

The site, also called BKB, is closed Mondays but open 3 to 11 p.m. Tuesdays; 7 p.m. to midnight Wednesdays; and from 10 a.m. to midnight from Thursdays through Sundays.

The idea is to “blur the lines between work, life and play [and] merge the worlds of fitness, creativity and community,” organizers said, offering “a new type of community space that blends state-of-the-art climbing terrain with art, culture, music and entrepreneurship.”

While climbers have been eager to see the facility open – the next nearest comprehensive climbing space is in Everett – work slots will likely fill in fast as well; with Kendall Square office and lab space hard to find and increasingly expensive, innovators and entrepreneurs have been pushing out to Alewife and Boston and racing to occupy new workspace such as the 13,000-square-foot Workbar that opened May 20 in Central Square.

Although the Brooklyn Boulders Somerville soft opening was July 5, having a grand opening about a month later has seemed to only build curiosity, and the events are drawing crowds. Staff at BKB reported 1,200 people turning up Wednesday for a ribbon-cutting by Mayor Joseph A. Curtatone and free climbing from 7 p.m. to midnight; today and Friday run from 10 a.m. to midnight with live music, food trucks and free climbing; and it culminates with the same hours and offerings Saturday at what’s being pitched as a full-fledged indoor street fair.

There are no gear rentals during the grand opening, but staff are allowing closed-toe athletic shoes. Climbers should print and sign this waiver before arriving.