‘Rush’: Howard finds a winning formula in a true-to-life racing tale from the 1970s 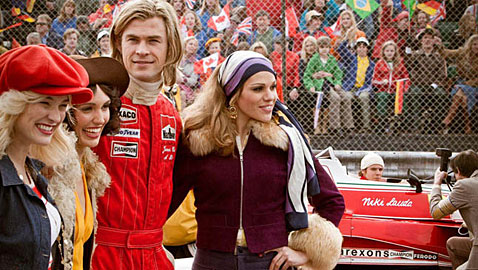 ‘Rush’: Howard finds a winning formula in a true-to-life racing tale from the 1970s

Ron Howard’s directorial career has been all over the map. Early on he made a spate of serviceable comedies (”Night Shift” and “Splash”) and took dips into the fantastical (”Cocoon” and “Willow”) before entering a very serious stage that saw “Backdraft,” “The Paper” and “Ransom.” During that stretch Howard also delivered his crowning achievement, “Apollo 13” (it’s a far more competent and complete work than “A Beautiful Mind,” which garnered a slew of Oscars) as well as the ill-conceived reality TV satire, “edtv.” Along the way Howard unsatisfactorily attempted an adaptation of Dr. Seuss’ “The Grinch who Stole Christmas” and ventured into Dan Brown territory, directing the lackluster “Da Vinci Code” films. More recently, the man who had once been Opie of Mayberry appeared more than ready for the directorial graveyard after laying the clucking Vince Vaughn and Kevin James dud, “The Dilemma.” 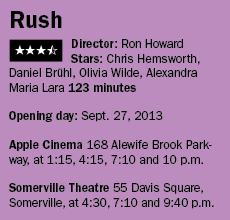 But like the hero of his 2005 boxing drama “Cinderella Man,” Howard has come off the ropes with “Rush.” To sit through the real-life Formula One speedway drama, one might think they were viewing the work of an emerging auteur just hitting his stride, that first big studio budget behind him.

It’s easily one of Howard’s two or three best films, and the subject matter, while held in check by history and fact, zips along supercharged by the immaculate production, detailed craftsmanship and dead-on performances. The men of subject, James Hunt (Chris Hemsworth, better known as Thor) and Niki Lauda (Daniel Brühl), are Formula One deities of the early ’70s – back when household names Mario Andretti and James Stewart were just getting off their training wheels. Both men were born sons of big European money and both were spurned by their families when they opted to go into something so lowbrow as auto-racing – but that’s where the similarities begin and end.

Hunt, a hedonistic Brit off the track and an unbridled force guided by instinct and gut on it, has a need for speed and a flirtation with death. His appetite and personality is bigger than life and fills the screen over the roar of the engines. To put it all in perspective, one fellow racer advises Lauda, who is about to go on a date with the racetrack manager’s ex-wife, of the act he’s following: She had a fling in the back of an ambulance with Hunt as her husband stood feet away, unknowing. The racer adds, “He’s a good driver, but a legendary fuck.”

Lauda, a taciturn German who speaks too bluntly for his own good, earned his way up as technician, retooling cars and making them faster by retrofitting them. He and Hunt tangle initially in the lower Formula Three ranks and reignite their rivalry on the bigger stage when Lauda is driving for Ferrari and Hunt is wasting away a foppish British lord’s largesse and having champagne in the pits. For three years the two vied to be the best driver in the world. Lauda, the calculated practitioner, achieves the seat twice, but at all times Hunt is right there ready to take it from him – until the 1976 season. The German wanted to have a race in the rain on a tricky course aborted, but lost the vote. On a tricky hairpin turn, he ended up in a wreck and trapped in a fire that burned him at more than 800 degrees for longer than a minute.

The smart thing about “Rush” is that the races are not dragged on as epic events. They’re terse and make their point. In their own way, they’re mini wonders of filmmaking, brilliantly staged, shot and choreographed. The montage, like the drivers, is efficient and minimal (no extra weight or pomp, just muscle and skill) and the stellar sound editing puts you right there on the track and nearly makes you wish for a pair of earplugs as the cars rev up and vroom around the track. I’m not sure if I’ve ever walked out of a film and said “This should win an Oscar for sound editing,” but this is surely one.

The drivers too are given soul by the people in their lives and their value to each other. Hunt goes through women like grease rags, though he does marry supermodel Suzy Miller (Olivia Wilde) who, in a fit of frustration, leaves him for Richard Burton; Lauda marries a woman (Alexandra Maria Lara) he meets at a party he can’t fit in at because he’s socially inept and would rather be reworking his car in a garage. It’s one of the film’s best scenes when her car breaks down in the Italian countryside and she tries to get a car to pull over for a ride by showing some leg, and the car that eventually does pull over does so for Lauda, because it’s full of three racing enthusiasts who consider it an honor to let Lauda drive their car. To that point she had no idea who he was, and after that, it’s love at first swerve.

And while “Rush” is a brilliant sparkle, and perhaps a relief to Howard, it’s really Hemsworth and Brühl and the chemistry between the two actors that make the film go. With another set of players and a different driver behind the wheel, this might have been a flabby biopic without any punch and pull. But something magical has rolled out of the hanger, all cylinders firing. Given the roadmap, there was little room for error, and Howard and the boys punch it home with gusto.