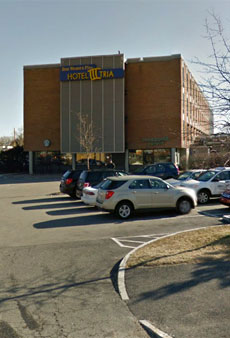 Melando Yaphet Streety, 30, and Bryahna Tracey-Bushamie, 20, were arraigned in Middlesex Superior Court in Woburn in advance of a Wednesday pre-trial hearing.

Streety is considered a longtime pimp who has been convicted at least twice of continuing to run prostitution rings even while in prison. He has served time in Canadian prisons for running underage prostitutes in Toronto.

“These are disturbing allegations that the defendants orchestrated a scheme by which they brought two young women from Michigan to Cambridge and forced them to work as prostitutes,” Ryan said. As authorities describe the case:

In early September, Streety rented a car that Tracey-Bushamie drove from Michigan – with the two girls as passengers. They rented a room Sept. 7 at the Best Western Plus Hotel Tria near Alewife and posted ads on the website backpage.com offering sex services for a fee. The victims were dropped at the hotel by the defendants, who gave them cellphones with numbers given in the ads. The victims were told to take calls, have sex for money and turn it over to the defendants.

Two days later they moved to the Marriott Hotel in Kendall Square, paying for it in cash. The arrangements were the same as before, but this time Streety went to the room with the girls and forced both to have sex with him. Then he left and a client arrived.

Hotel security, becoming suspicious, called Cambridge police, who found the online ad and made contact with one of the victims. Authorities found money, cellphones, a ledger, advertisements, condoms, a credit card and receipts.

A Cambridge arrest report from Sept. 11 shows Tracey-Bushamie being arrested with a Michigan 17-year-old who was charged with committing Sexual Conduct for a Fee. Ryan’s office declined to give the ages of the girls or to explain why Streety and Tracey-Bushamie had chosen to come to Cambridge from Michigan.

Human trafficking is estimated to be a $32 billion industry, with nearly 30 million people trafficked worldwide – 15,000 to 18,000 in the United States alone, Ryan said.

The state’s new human trafficking law, “An Act Relative to the Commercial Exploitation of People,” went into effect Feb. 19, 2012. It targets all aspects of the human trafficking chain –victims, pimps and customers – and creates crimes and increases penalties for existing crimes, especially where they involve juveniles. It also provides a broad range of services for victims and facilitates coordinated information sharing among agencies, Ryan said.

“This new human trafficking legislation has given us more effective tools to target prostitution and forced labor, ensuring that we have more resources to better aid the victims of this devastating crime,” she said.

Streety was arraigned on two counts of trafficking a person under 18 for sexual servitude, two counts of deriving support from a minor prostitute and five counts of rape. Middlesex Superior Court Clerk Magistrate Michael Sullivan ordered the defendant to be held without bail.

Tracey-Bushamie was arraigned on two counts of trafficking a person under 18 for sexual servitude and two counts of deriving support from a minor prostitute. Sullivan ordered her to be held on $100,000 cash bail with the conditions that if she makes bail, she is to live in Michigan with her family and comply with GPS monitoring, have no direct or indirect contact with the victims and witnesses, surrender her passport and report to probation once a week by phone.

The investigation is ongoing and is being investigated by Cambridge police with the help of  Immigration and Customs Enforcement and Homeland Security Investigations. It was not explained exactly why the federal agencies were involved.

The prosecutor assigned to this case is Assistant District Attorney Patrick Fitzgerald.