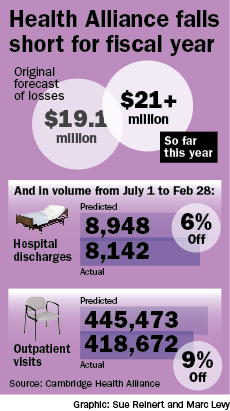 The Cambridge Health Alliance has already lost $21.5 million eight months into its current fiscal year – $2 million more than the struggling health care system expected to lose for the entire year.

The Alliance, the state’s second-largest provider to poor and uninsured patients, forecast a loss of about $19 million for the year ending June 30 when trustees adopted this year’s budget. Spokesman David Cecere said the final loss will be greater but “it’s too soon to speculate how much that will be.”

“We have a number of programs in place to address volume issues and ensure continued access to the important services we provide,” Cecere said in an emailed response to questions.

The system had expected to do better this year than last year, but that looks virtually impossible. Last year the Alliance lost $18.6 million.

Cecere said the flood of red ink so far this year stems from continuing problems with low volume and delays in carrying out money-saving improvements. The bad news is another setback for the Alliance, which includes the former Cambridge City Hospital, Somerville Hospital, Whidden Memorial Hospital in Everett, and 15 primary care doctors’ offices.

The system has consistently lost millions of dollars on its health care operations, blaming mostly inadequate payments from Medicare, Medicaid, and private insurers and reduced state help for the uninsured.

Last month officials disclosed that the Alliance, in an effort to beef up lagging volume, was extensively reorganizing its primary care services to make it easier for patients to get appointments. The most recent volume figures, reported to the Alliance’s board of trustees’ finance committee April 3,  show continuing problems.

For the eight months from July 1 to Feb. 28, inpatient discharges as a measure of hospital volume totaled 8,142, which is 9 percent fewer than the budget forecast. Outpatient visits were 418,672, which is off 6 percent from the forecast.

There was little discussion of the larger-than-expected loss at the finance committee. But committee chairman and Cambridge Finance Director Louis Depasquale did ask when the reorganization of primary care might show improvements in volume. Chief Medical Officer Dr. Assaad Sayah said results wouldn’t come until after July 1, in  the first quarter of the next fiscal year.

Last year the Alliance completed a long-sought clinical partnership agreement with Beth Israel Deaconess Medical Center in a bid to take advantage of health care reforms favoring systems that can provide a complete range of care to patients for a set payment. To benefit from reform, hospitals such as the Alliance that provide basic care need to affiliate with hospitals such as Beth Israel that provide complex services, and vice versa.

The Alliance also hired an adviser, FTI Consulting, to recommend ways to improve income and cut costs.  Officials haven’t disclosed any of the advice, but this year’s budget includes $17 million in unspecified savings. Some trustees were reluctant to approve the budget with no backup for the projection.

Cecere identified one reason for the increased loss the Alliance now expects: “delays to expense reductions/income improvements that will result from our work with FTI Consulting.”