Quakers persevere in reforming prisons, aiming to atone for idea that went awry 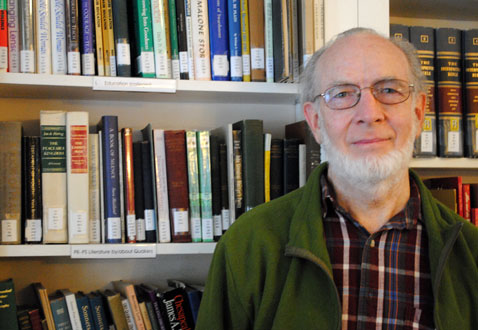 Quakers persevere in reforming prisons, aiming to atone for idea that went awry

By Margaret Ringler and Nick Hathaway

When David Myers visits the Massachusetts Correctional Institute at Norfolk, he has to pass through a two-door security chamber called “The Trap.” Before entering, he empties his pockets, placing his wallet, keys and other personal belongings in a locker. In The Trap he removes his shoes, jacket and belt and waits with other visitors. Correctional officers search for unwanted items: guns, drugs, unauthorized medications, handcuff keys, candy. They check the waistband of his pants, his shirt collar and the soles of his feet. Once approved, Myers puts on his shoes and belt and, within 10 minutes, exits The Trap, heading toward a looming concrete building with the other visitors.“It’s sort of built like a circus tent,” he says. “It’s very pleasant.”

Myers chats with a man who’s been a prisoner at Norfolk for 17 years. They sit side by side in an open room filled with families, guards and visitors of all ages, playing cards, catching up and sharing meals of vending machine hot dogs, sandwiches and pizza slices. There’s a children’s table with games.

Myers is the presiding clerk of Friends Meeting at Cambridge, a Quaker meeting just outside Harvard Square, and a member of the meeting’s Prison Fellowship. Myers makes the hourlong drive to Norfolk Prison several times a month, one of a collection of efforts by this fellowship toward prison reform. He joined the community of Quakers at Friends Meeting at Cambridge in the ’80s due mainly to his wife and daughter’s involvement, starting on the Peace and Social Concerns and Friends for Racial Justice committee but joined the Prison Fellowship as soon as it was formed.

Since its founding in 2007, the meeting’s Prison Fellowship has had as many as 15 and as few as four attendees any given week, but in the past few years it has grown considerably – a phenomenon Myers attributes to increasing media attention on problems in the prison system.

Once a month, members meet to discuss their individual projects, share ideas and work with activists, ex-prisoners and their families to create an area support system. Along with members’ independent projects such as visiting prisons, writing letters and volunteering at political reform organizations, the Prison Fellowship has group initiatives, including a bail fund and a weekly sharing circle for ex-prisoners and people who care about them.

Myers’ project has evolved. He began his visits to Norfolk more than seven years ago as a volunteer providing transportation for those who couldn’t otherwise get to friends or family. When a friend from his meeting introduced Myers to an inmate at Norfolk, he began visiting regularly.

Quakers have a historical attachment to prison reform, and Myers has become well versed in it. “There’s a tradition of Quakers which goes way back,” he explains. “In the 17th century they were persecuted and thrown in jail.” Because Quakers were imprisoned early on for their beliefs, improving the criminal justice system is a long-standing Quaker tradition.

Quakers helped form the Philadelphia Society for Alleviating the Miseries of Public Prisons, which in 1829 opened the first prison to incorporate solitary confinement system in the U.S, Eastern State Penitentiary in Philadelphia. “The idea of the penitentiary was a Quaker idea,” Myers says, “that you would go off by yourself and you would just pray and read good books and become a better person.”

Only about a decade later Charles Dickens was already identified prisoners in solitary as “dead to everything but torturing anxieties and horrible despair” – much later to be identified as Special Housing Unit Syndrome and to include hallucinations, insomnia and paranoia, uncontrollable feelings of rage and fear, suicidal feelings and the symptoms of post-traumatic stress disorder.

Solitary confinement as envisioned by the Quakers offered a humane alternative to traditional harsh physical conditions, but it did more harm than good.

“I think there’s some embarrassment about that,” Myers says.

Even Myers, familiar with prison reform history, was surprised by the current restrictions on prisoners at Norfolk. After getting to know each other, Myers wanted to bring a photo of his family to his friend at Norfolk. But the prison rules were strict: Only teachers and lawyers could bring in additional materials, because requiring visitors to send most things through the mail makes the screening process easier. “The only thing you’re allowed to carry into the place is a jacket and a locker key and a cash card,” Myers says.

To share his family photos, Myers had to mail them.

MCI Norfolk is a medium-security facility that the state nonetheless describes as needing “maximum external and internal control and supervision of inmates.”

“Inmates accorded to this status may present an escape risk or pose a threat to other inmates, staff, or the orderly running of the institution,” according to a state description of security levels. “Supervision remains constant and direct.”

When his visits with the Norfolk prisoner end, Myers exits through The Trap and heads back to Harvard Square. While reflecting on his visits and his own goals around prison reform, Myers sits in a room inside Friends Meeting at Cambridge, a brick building in a peaceful loop of grass and trees between tony Brattle Street and the tidily manicured Longfellow Park. Only a couple of block away are Harvard’s American Repertory Theater stages, the L.A. Burdick gourmet chocolate store and the rest of Harvard Square.

Meanwhile, his friend is strip-searched before being returned to one of 18 dormitory-style living units or two modular units. The interiors are mostly cold, institutional metal and plastic surrounded by cinderblock walls.

MCI Norfolk is the largest prison in the state. It is surrounded by a mile-long concrete wall, described as 9 inches thick, more than 19 feet tall and topped by electrified barbed wire. Inside, Myers’ friend is one of about 1,524 prisoners crowded into a 35-acre facility built to house 1,084, according to the state Department of Correction.

Myers pauses, searching for the right words to describe his feelings in his warm room surrounded by teeming bookshelves and a few pieces of worn, wooden furniture. “I just think people have to be treated like human beings,” he says, “and visiting him is treating him like a human being.”