Health Alliance bets on elders program, finances unknown but within its mission 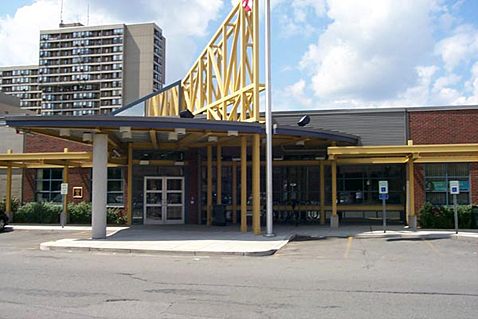 Health Alliance bets on elders program, finances unknown but within its mission

A growing seniors program at Cambridge Health Alliance could move to empty space at an East Cambridge primary care clinic when a lease with the Cambridge Housing Authority ends in December 2015.

The Cambridge Health Alliance wants to bring more patients into its Elder Service Plan, an innovative program that keeps low-income, frail seniors out of nursing homes, even though officials don’t know if the program makes money for the struggling health care system.

The Alliance is not renewing its lease on a Green Street space where participants get vital services in part because “the facility is inadequate for the number of patients we would like to treat,” senior director of medicine Kathleen Murphy told trustees at a finance committee meeting Oct. 7.

Officials are considering moving to empty space at the Alliance’s East Cambridge primary care clinic on Gore Street when the lease with the Cambridge Housing Authority ends in December 2015, officials said.

In another expansion bid, the health care system plans to open a satellite Elder Service Plan center at its Malden clinic. Officials previously said there’s an unmet demand for such services in the area.

This year 279 seniors are enrolled in the program, which is part of a nationwide initiative called Program of All-Inclusive Care for the Elderly. There are about 100 PACE programs nationwide, and the number has been increasing, Murphy said.

The Alliance program provides coordinated medical care and drugs as well as dental and vision services, transportation, help at home and personal care. Members come to the center in Manning Apartments, the public housing development, at least once a week for social activities, exercise and medical checkups. Some participants live on designated floors in five senior public housing developments and others live in private housing.

Elder Service Plan participants are covered by Medicare and Medicaid. The plan gets a set monthly payment for each member, which must cover everything they need.

The payments exceed what it costs the program to provide the services, Alliance spokesman David Cecere said. But the rates that the Elder Service Plan pays the Alliance for medical care for its participants don’t cover the Alliance’s costs, Cecere said.

“CHA has not yet developed resources and systems to analyze the combined financial performance of these elements, “ Cecere said.

The Alliance, a safety net hospital that serves high numbers of poor and uninsured patients, has been struggling to earn a profit. Asked why officials want to expand the Elder Service Plan despite not knowing its overall financial impact, Cecere said it “is consistent with CHA’s mission to serve vulnerable populations through coordinated care.”

Cecere added that if participants were not in the program, the Alliance “would have provided the individual services at the Medicaid rate anyway” – also the rate the Alliance charges to the plan. “Even though we cannot identify the exact financial return (although we are developing the financial tools to do so),” the plan still helps the Alliance financially in other ways, Cecere said in an email.

Demand for similar coordinated services for frail elders in the Malden area has attracted competitors, Murphy said. “Other PACE programs are trying to move in,” she said.

State officials like PACE because it reduces Medicaid costs for nursing home care by keeping seniors in their own homes. “One study showed that the eight PACE programs are saving the state $50 million to $60 million a year,” she said.