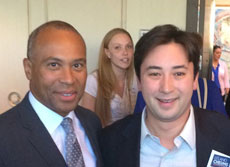 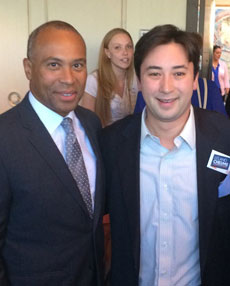 After an unsuccessful run for lieutenant governor last year, Leland Cheung was appointed by Gov. Deval Patrick to the board of the Massachusetts Technology Collaborative.

Entrepreneurs and the tech industry have a champion in city councillor Leland Cheung, whose Innovate Massachusetts Alliance is going on a small listening tour for priorities to bring to new Gov. Charlie Baker.

“We’ll be crowdsourcing the agenda with caucuses around the Commonwealth. What gets included – non-competes, STEM education, local policy – will be up to you. Anything that helps build the economy of tomorrow is on the table,” Cheung said in an explanatory press release.

The tour starts at 5 p.m. today at Workbar, 45 Prospect St., Central Square, with PayPal Chief Operating Officer David Chang as a guest; hits Greentown Labs at 28 Dane St., Somerville, at noon Thursday; moves on to Worcester; returns to Cambridge at 6:30 p.m. Jan. 22 for a gathering at the Venture Café, 101 Main St., Kendall Square; then heads off to Springfield and Lowell.

Cheung said the group’s first step was a letter to Baker asking that his transition team include a separate group representing the “innovation economy” and the community’s agenda.

That mission got a boost in late December, as outgoing Gov. Deval Patrick appointed Cheung to be one of 15 board members of the Massachusetts Technology Collaborative, a 33-year-old group created by the Legislature to fight for tech as a state priority.

Cheung ran for lieutenant governor last year, winning an endorsement from The Boston Globe “by dint of his determination to reject the past uses of the job as a political liaison with strong links to patronage [and instead] advocate for broadband access and high-tech jobs to underserved areas.” Steve Kerrigan, a former aide to the late U.S. Sen. Ted Kennedy and chief of staff to former Attorney General Tom Reilly, beat him in a primary, with 51 percent of the vote to Cheung’s 30 percent.

Cheung shook off the defeat.

“I realized I don’t actually need to be in office to help affect regional cooperation and the growth of the innovation economy that I talked about during the campaign,” Cheung said.

His Innovate MA group aims to come up with a nonpartisan agenda “to promote policies that support job creation, workforce readiness and economic competitiveness relative to other hubs of innovation,” Cheung said, as well as to cast a net wide enough to cover everything from robotics and the arts to food trucks and urban agriculture.