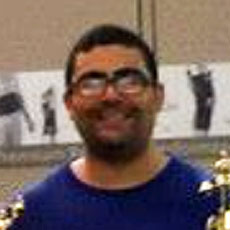 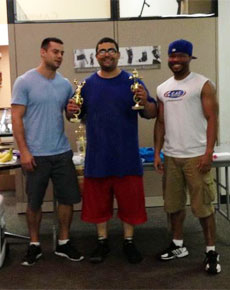 Carlos Colina, center, is a suspect in a death discovered Saturday.

There is only one suspect in the killing and dismemberment discovered Saturday in Kendall Square, and that man was in Cambridge District Court on Monday, held on $1 million cash bail.

The suspect is Carlos Colina, 32, of 157 Sixth St., Middlesex District Attorney Marian Ryan said. He was arraigned on charges of assault and battery causing serious bodily injury and improper disposal of a body.

Update on April 8, 2015: Colina will be arraigned on a charge of murder as well, Ryan said. He is scheduled to be in Cambridge District Court at 9 a.m. April 14.

The victim in the case was identified as Jonathan Camilien, 26, of Somerville. Authorities say Camilien and the suspect were known to each other.

Authorities say they were alerted to the death early Saturday with the report of a suspicious duffel bag found on the Officer William Loughrey Walkway, a pedestrian path between pharmaceuticals companies and the 14-acre federal John A. Volpe Transportation Center. A bomb team went to investigate but discovered there were human remains inside, said Jeremy Warnick, director of communications and media relations for Cambridge police.

Officials say a video led police officers to the second set of remains, which were from the same body. The Office of the Chief Medical Examiner has conducted an autopsy and is awaiting toxicology results before issuing a final ruling on the cause and manner of death.

“This was a gruesome discovery,” Ryan said. “Detectives are continuing to analyze evidence and awaiting information from the Office of the Chief Medical Examiner so that we may determine if additional charges are warranted.”

Colina’s charges were first reported Saturday as being an accessory after the crime of assault and battery and improper disposal of human remains, and officials said there could be other suspects.

But on Monday, Ryan said, “We are not seeking anyone else in connection with the discovery of these human remains.”

More details on the crime and accusations against Colina were reported Monday by Sara Feijo in the Cambridge Chronicle.

The next scheduled hearing for Colina is April 14. Judge Roanne Sragow set bail at $1 million cash, and bail was revoked in an open case involving Colina – an open criminal case in Middlesex County in which he is charged with assault and battery. The alleged victim in that incident is not the victim in this case.

Colina is from Bowdoinham, Maine, and worked out at the nearby Cambridge Athletic Club in Tech Square.

This post was updated July 1, 2015, to add the correct and full identification of the Officer William Loughrey Walkway.