Startup aims to let anyone drive for Uber, puts Cambridge company in its crosshairs 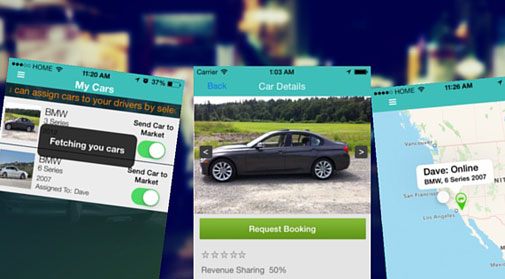 Startup aims to let anyone drive for Uber, puts Cambridge company in its crosshairs

People are alarmed by the so-called sharing economy and who’s being left out of it. That was clear from the well-attended Saturday panel on the topic where city councillor Nadeem Mazen handed off questions and accusations to representatives of the car service Uber (which has the taxi industry crying foul) and bus service Bridj (which has stepped in where the MBTA falls short).

If only Josiah Larkin, co-founder of a startup called HyreCar, could have been there to tout how his company makes the sharing economy work for drivers who might otherwise be left out.

“We’re definitely providing a service to allow those underemployed, unemployed and low-income folks to actually start getting out there and making more than just minimum wage,” Larkin said in a recent telephone interview from HyreCar’s offices in San Francisco.

The company makes its money from car-rental commissions as it connects drivers without adequate cars to owners whose cars are sitting idle.

It’s a model shared by the companies Breeze and Tryp, as well as by Uber’s own lease program, and part of what’s called derivative startups – those created to piggyback on other companies. (Drivers of HyreCars could also run errands TaskRabbit, deliver groceries through Instacart or for any number of other on-demand services run through apps, but Larkin said 99 percent of HyreCar drivers rent cars for Uber.) G. Felda Hardymon, a Harvard business professor, told The Wall Street Journal that, given that the risk of startups means that derivative startups might be “simply doubling risk.”

Larkin, who owned a livery service and consulted on Lyft in its early stages, according to his company bio, admits there have been reversals in expectation at HyreCar since its official launch in January – but always in a good direction.

“Boston wasn’t one of our official launch areas, but somehow we made it out there in the first week,” he said, referring to an almost immediate demand from as many as 150 drivers in a region where there was a single car available for rental.

The same dynamic played out nationwide, especially in the key markets of California, Massachusetts, Florida, New York and Texas where the company has focused its publicity efforts.

“At first it was drivers, and we thought it’d be vehicles. We’re like, ‘We’ll have a supply easily, but we won’t have demand,’” Larkin said. Uber changed that by having “more than 100,000 drivers who they’re trying to get cars for nationally. There’s a huge demographic of people that are unable to enter the market because they don’t gave access to a qualified vehicle by Uber’s standards. So the whole paradigm for us switches to, ‘Oh wait, we’re having a supply issue.’”

Another factor: Drivers who get fancy new cars from Uber itself and quickly discover the limitations of their lease. “What people are finding out with their leases is they can drive for only three days a week,” Larkin said. “They’re coming to us [to rent out their] vehicles for the remaining days, because with a week of driving they can actually make a living.”

There has been a recent influx of car offers to help balance supply and demand. Traditional car-rental agencies are coming forward as well as other fleet managers and mom-and-pop car owners, Larkin said, allowing a leap from an estimated 250 vehicles in Greater Boston for nearly as many drivers to an expected 550 with contributions from two national rent-a-car companies already working with HyreCar in Texas and California. The company already relies on fleet cars in areas such as New York that don’t allow personal cars in the Uber model, but HyreCar also lists everything from a Cadillac Escalade stretch limousine to a scooter. Alas, no helicopters yet, despite a surge in helicopter rental apps.

HyreCar competes with RelayRides, which lets owners share their cars for pay for extended periods (and is based in Cambridge, where Zipcar was founded with its cars-by-the-hour model), but says it makes car owners more money by taking only a 15 percent commission, compared with 25 percent taken by RelayRides. But at about 5,000 drivers and a few thousand cars, the company has a distance to go; RelayRides calls itself “the nation’s largest peer-to-peer car rental marketplace” and cites vehicles in more than 2,500 cities and, in an example of how its model is different, 300 airports all across the country.

RelayRides’ mission was forged in the Great Recession, which “primed the world to accept carsharing en masse given its clear environmental and social benefits,” Shelby Clark, founder and chief executive said in the company blog. “This combines with … an increased trend of sharing that is built on the belief that access to goods is better than actually owning them” as a step away from the things Clark saw epitomizing the past decade, “like McMansions, Hummers and credit card debt.”

Still, the company hasn’t shied away from suggesting its cars can be Uberized, and Larkin argued that HyreCar has a better approach to insurance: making a driver’s insurance primary instead of an owner’s, easing a problematic aspect of Uber insurance being on only when there’s a customer in the car.

Concerns about insurance checks and driver backgrounds have also been addressed. “Every time a driver comes back we vet them again, so they can wind up being vetted multiple times, because you just never know what changes,” Larkin said. “We say that every time you want to come get into a car we need to be sure you’re complying with our guidelines.”

In a final surprise for the company, Larkin said taxi company officials are coming to HyreCar as well – to replace drivers abandoning the industry.

“It’s because of this Uber marketplace. The fact of the matter is Uber and Lyft and all these other companies are such a disruptive force to the industry [that] revenues have dropped substantially. Even in suburbs of the Bay Area, taxi drivers make $8 or $9 an hour on average, where if you’re in Uber you’re making $35 or $40 an hour” before driver costs such as insurance, gas and tolls, Larkin said. “They had such a drop-off in people who are actually driving the cabs that they’re doing all sorts of things to try to incentivize people to come back. Especially in the Bay Area, cabs have lost their advantage.”