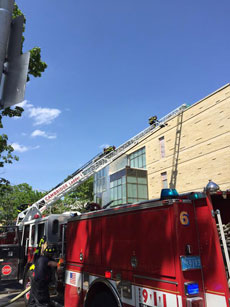 Firefighters head to the roof of 100 Putnam Ave. on May 30 to battle a fire now causing delays to the school’s opening. (Photo: Cambridge Fire Department)

A fire last month at a school construction project will take longer to repair than first thought, delaying its opening – as well as setting off a cascade effect for other construction projects affecting hundreds of students, teachers and residents, officials said Tuesday.

After a May 30 fire at the Martin Luther King Jr. School and Putnam Avenue Upper School building, damage was estimated at $2.5 million, to be covered by insurance, and testing began to ensure move-in over the summer so school could start there Sept. 8. City Manager Richard C. Rossi was initially optimistic, saying contractor Rich-Caulfield “has committed to having the MLK Jr. School open by September … we have a strong team in place that will get the job done.”

But recovery would take longer than thought, he said Tuesday. “While the construction team and the disaster recovery team have made every effort since the May 30 fire to keep this project on schedule, it has become clear that in order to ensure a safe and secure teaching and learning environment,” he said, “the completion and opening of the MLK Jr. School/Putnam Avenue Upper School will be delayed.”

His team was working on a revised project timeline, which he said would be in place before the end of the school year. “I am greatly disappointed in the project setback,” he said.

A community meeting planned for Thursday would be delayed until he could release the new timeline, he said.

The delay means that the students, teachers and staff who were expected to move into the new school will have to stay in their Kennedy-Longfellow School swing space, which means it won’t be available for students from the King Open School and Cambridge Street Upper School that is the next of three school construction projects being tackled by the city.

The delay in the opening of the 100 Putnam Ave. campus may also affect the schedule for the attached Valente Library, Gold Star Pool and Community Complex Project, Rossi said.

City and school officials would work closely “to create a detailed [new] logistical plan for the 2015-16 and the 2016-17 academic years” to share with the community, Rossi said.

The Putnam Avenue project’s price tag is $95.5 million, which wouldn’t be affected by fire damage covered by insurance – described initially as a combination of fire, smoke and water damage to the third floor, heating and air-conditioning units and roof, where the fire began as a result of combustible, rubberized roofing materials. Lee Gianetti, director of communications and community relations, was asked Wednesday via email for more information, responding:

Investigators have determined that the fire was due to an accidental cause. There is still an active investigation taking place to determine if any person or actions are attributable to the cause of the fire. The final dollar figure for the damage sustained is still being calculated. It may take some time before the value is known, as numerous parties are involved in the process, such as insurance adjusters.

Cambridge Fire Lt. David Pierce said that because the fire is still under investigation, no information about a cause can be released. The investigation will be “a fairly long process” with “no certain time frame,” he said.