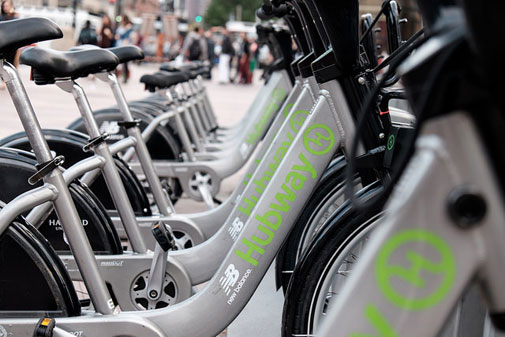 The city’s noble opposition to ads or branding on its Hubway bike rental system is crumbling, with councillor Tim Toomey making a formal request Monday for the city manager to rethink the ban.

Not only is it the only way to ensure the long-term solvency of the system, some fellow officials said, but a bow to common sense.

“While our ideas and vision of this at the time were probably very right,” Mayor David Maher said, referring to a no-ad policy put in place in the spring of 2012 for launch the following summer, “the fact of the matter is that … if you go to [some Cambridge Hubway stations] right now, 50 percent of the bicycles that are in there have advertising on them. Because they’re from people who rode them from Boston.”

The system includes about 1,300 rental bikes at 140 stations, with 91 of those stations in Boston – and therefore hosting bikes that bear New Balance branding. Cambridge, in comparison, had 33 Hubway stations as of July, all with unbranded bikes. (Somerville has a dozen stations; Brookline has four.) The system launched July 28, 2011, in Boston with 610 bicycles and 60 stations and expanded into the other communities about a year later.

Based on total trips last year, Cambridge has six of the 10 busiest stations, led by one at the Massachusetts Institute of Technology at Massachusetts Avenue and Amherst Street, and for two winters, Cambridge has kept its Hubway stations open while the rest of the system largely shuts down.

Still, councillor Leland Cheung asserted Monday, the system is at risk of faltering. A similar program in Montreal filed for bankruptcy protection this year, and New York’s Citi Bike asked the city for financial help last year, its second.

“It’s not long-term sustainable, so we need to come up with something to address long-term solvency,” Cheung said, noting that Boston’s Big Belly solar trash compactors are paid for completely by advertising.

But Boston, which started its service as a split-profit partnership with operator Alta Bicycle Share of Portland, Ore., now sees the benefit to paying Alta outright to maintain the system while the city takes all the money from membership fees and advertising, according to The Boston Globe’s Martine Powers. Nicole Freedman, of the city’s Boston Bikes program, described New Balance Hubway to the paper as being “in a very, very solid financial place. We’re in a position to fund expansion.”

Toomey has asked for a report from city manager Richard C. Rossi that looks to expand the system in Cambridge and keep year-round operation by examining at how “advertising revenue currently embraced in other communities can help.” He asks directly for “suggested changes to Cambridge’s policy.”

While some in the community accept the tradeoff of branded bikes for more service – City Council candidate and Fresh Pond Residents Alliance president Jan Devereux said Monday that she was among them – others remain firmly opposed. Councillor Nadeem Mazen was the sole council vote in opposition to Toomey’s order, and resident James Williamson spoke against the idea in terms as strong as he has been using since the start. “We have way too much advertising in our public realm,” Williamson said, citing Cemusa’s ad-laden bus shelters as part of the problem. “I don’t think we need more advertising rolling around our city on Hubway bikes.”

Mazen and Williamson had an ally in the previous city manager, Robert W. Healy, who explained in April 2012 why at the rollout of Hubway he opposed a branded service like Boston has:

“I guess it’s just a philosophy. I’m sort of opposed to the commercialization of municipal services. I think it’s an opportunity to partner with our universities and businesses, but the outright sale of the entire name for sponsorship was something I wasn’t really interested in having the city do … If it were to be done, I believe it would have had to have been done in a competitive process, not just with one company that might make an offer. If you look at the total grant funding and total of Harvard and MIT investment and commitment the city made with some of the increases … there were significant funds to embark on this at-least three-year exercise without having to go to commercialization.”