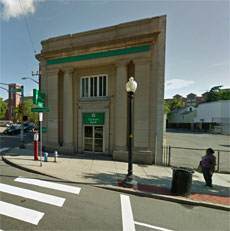 A Citizens Bank branch in East Cambridge was the scene of an unarmed robbery Saturday, police said. (Photo: Google)

Crime does pay – about $280, and only temporarily.

Police arrested Michael Flaherty, 28, of South Boston, in Braintree on Saturday because they believe him to be the robber of the East Cambridge Citizens Bank shortly before 1 p.m., just a few hours earlier.

Tellers at the Cambridge Street branch reported seeing a tall, very thin man standing by the bank’s deposit-slip area, looking at a white piece of paper in his hand. He “took a lollipop from a glass container on the desk,” according to the police report by arresting Officer John Callinan, and approached a teller window holding the paper in one hand and a cellphone in the other.

After asking how much it cost to open an account, the man showed tellers the paper telling them: “This is a robbery.  Don’t give me any dye packs.” Then he climbed through the teller window, dropping the phone, and a teller opened a cash drawer to push a hold-up alarm, Callinan said. The robber panicked and grabbed the $280 in $20 bills the tellers had been counting before closing for the day. 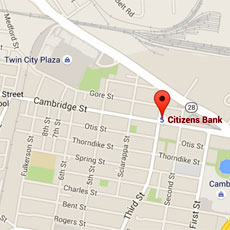 He climbed back through the window – taking his phone – and ran out. A witness outside told police the robber “looked like he was not sure which way to run next,” Callinan said. He ran up a driveway on Otis Street toward Thorndike Street, fleeing through several backyards with police officers in pursuit.

According to a second witness, shortly afterward the robber emerged back onto a street, climbed into a red Chevy Cobalt driven by a woman and ducked down as she sped away toward Sixth Street.

The same witness got a license plate number, which – helped by video and still photos from the bank – led police to an address in Stoneham, “where the Stoneham Police assisted in obtaining additional information that eventually led our detectives to an address in Braintree, where Flaherty was arrested and charged with unarmed robbery,” said Jeremy Warnick, director of communications for Cambridge police.

Flaherty was booked as a suspect in the robbery at about 6:30 p.m., Warnick said. That gave him about five hours to spend the money.

While the arrest of a suspect in an unarmed robbery of $280 might not be big news, he acknowledged, “there was some interest on Twitter from citizens over the weekend, and there was some quality detective work conducted.”

This is the second bank robbery in Cambridge in the past year, including one June 1, Warnick said.