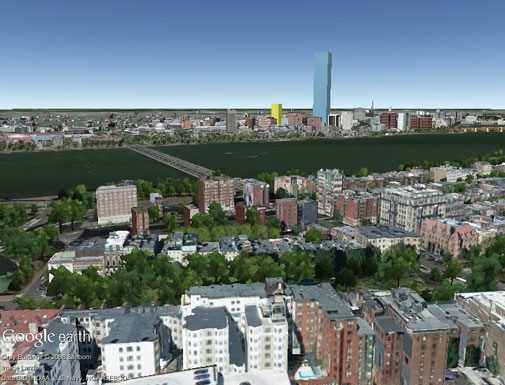 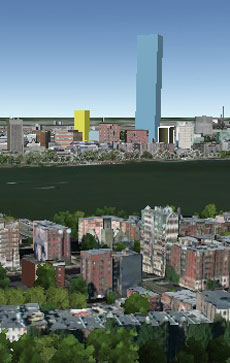 A 1,000-foot tower is among images of a possible rezoned Volpe site in Kendall Square. (Image: Google Earth)

A high-stakes process to remake 14 underused acres in Kendall Square and potentially give Cambridge a landmark skyscraper heads for a milestone meeting Monday. Two updates broke late this week about the federal John A. Volpe Transportation Center zoning proposal:

The experimental joint meeting’s schedule was released; it’s being held by both the City Council Ordinance Committee and the Planning Board.

Planning staff shared new documents, including a series of 3-D models they had previously refused to release without explanation.

The 620,000-square-foot Volpe parcel in Kendall Square houses one outdated Department of Transportation office building. The federal government intends to swap its land with a real estate developer in exchange for construction of a new building for the department. The city’s zoning process will set the rules for how that developer – who has not been selected – will be able to develop the parcel.

The zoning proposal originated from the city’s planning department, though it exchanged earlier drafts of the proposal with the Planning Board and accepted the board’s feedback on specifics before formally filing it with the City Council.

State law requires public hearings on zoning petitions, and in Cambridge – where they have often been heated and fractious – the usual practice is to hold separate council and Planning Board meetings. By holding one meeting, the city hopes to reduce unnecessary duplication. Mayor David Maher said the joint meeting request “came directly from the city manager.”

According to the agenda, the city’s planning staff will present from 6 to 6:30 p.m., the council and the board will discuss the zoning from 6:30 to 7:30 p.m., and public comment will be from 7:30 to 10 p.m. The mayor’s office said Friday that speaker time limits would be decided based on number of attendees, but that they expected each speaker would be allowed between three and five minutes.

On Thursday, the planning department updated its zoning amendments Web page to add a 15-page staff memo, a set of supplemental “design guidelines” for the Volpe parcel that the zoning would adopt by reference and a “Volpe fact sheet” explaining the federal land swap arrangement.

The staff background memo gathers information about the zoning proposal and site that had been provided in disparate presentations, maps and write-ups. It contextualizes the Volpe zoning proposal relative to the city’s 2013 K2C2 planning study and 2001 Eastern Cambridge Planning Study. The memo is written for a more general audience than a Dec. 29 staff memo that took a finer-grained, more technical approach. The memo also includes a discussion of the 3-D modeling work the city has done.

The three pages of design guidelines list a series of questions a future site master plan will have to answer. Because the Volpe parcel will fall under the city’s Planned Unit Development process, the eventual real estate developer will have to get Planning Board approval of a PUD master plan. The guidelines require:

a site massing plan addressing how height and bulk will be used.

a connectivity plan showing newly constructed streets and how they will connect with bicycle and pedestrian activity.

an open space plan “with a view towards maximizing solar access.”

Reversing its position, the city also released 3-D models of several conceptual scenarios for the Volpe parcel. City planners had shown static snapshots of the model to the planning board in April but refused to provide the model to the public, claiming they were exempt from disclosure because they had not been finalized by staff and voted on by the council.

But on Thursday, Assistant City Solicitor Anne Sterman wrote that “city staff have now completed work with the City Council on the zoning petition … and the city no longer believes that disclosure of the model will taint the city’s deliberative process.” It’s not clear why the city’s position changed, and the city did not respond to repeated questions about its withholding.

Here’s how the city looks today from Boston in Google Earth: 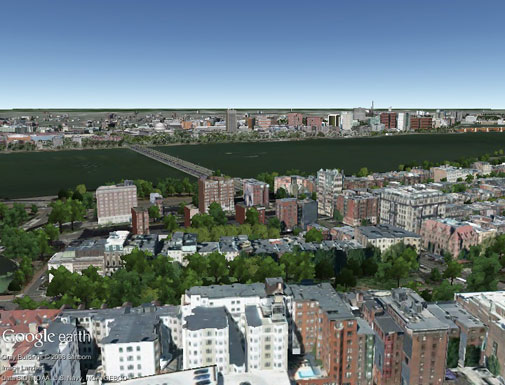 The city’s model showed four scenarios, each seen first as a Community Development Department image, then as a Google Earth rendering: 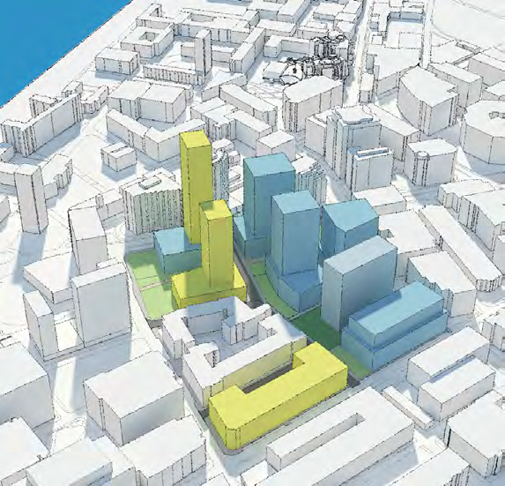 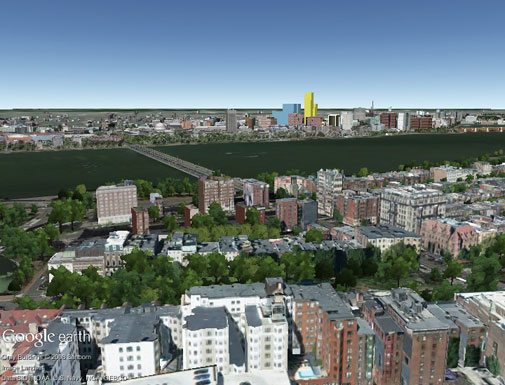 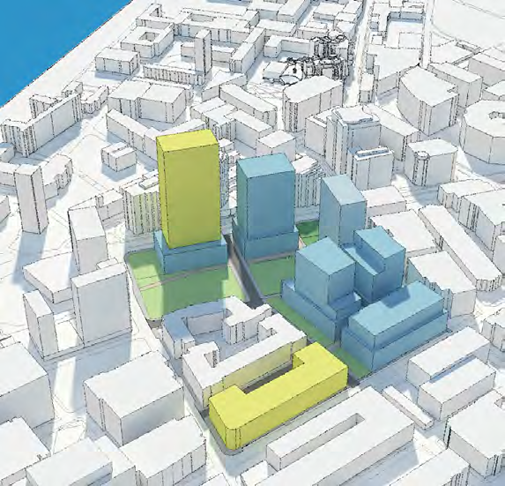 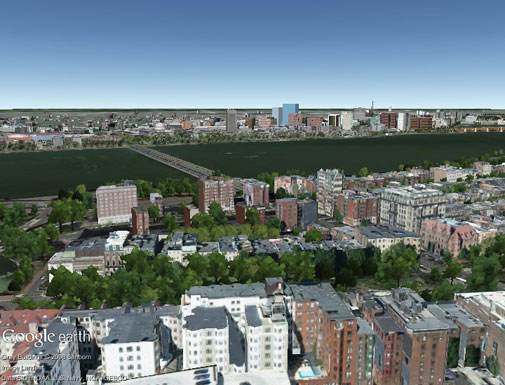 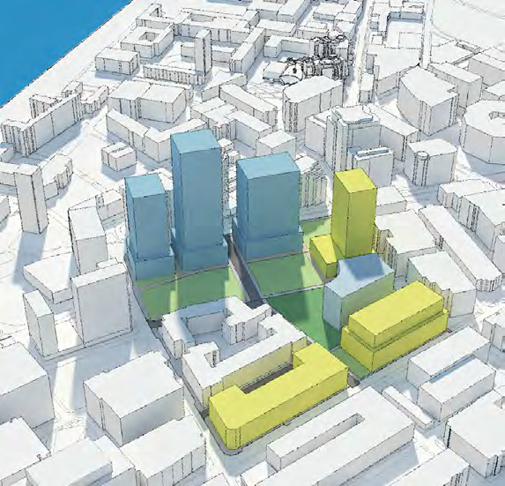 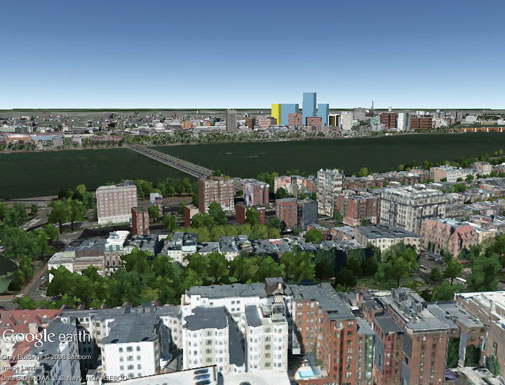 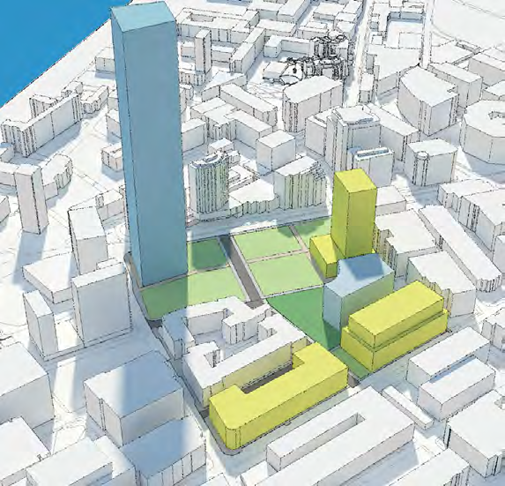 As of Friday morning, the city clerk reported getting only two letters for Monday’s meeting: one from Cambridge architect and resident Tom Stohlman (published in Cambridge Day), and one from Third Square residents Rosemary Booth and Jerry O’Leary. Third Square is a residential development in a 3.5-acre “cutout” from the Volpe parcel. Third Square and Volpe, together with their separating streets, form a 19-acre near-rectangular shape.

Stohlman suggested changing the commercial and residential allotments, allowing a commercial maximum of 40 percent of the area, rather than 60 percent. He asked the council to allow  greater height only in exchange for keeping the open space at present-day zoning levels and to not compromise its values on affordable housing, sustainable development, ground-floor retail or startup innovation space, all of which are components of the proposed zoning.

Booth and O’Leary worry that the zoning language as written could foreclose the possibility of a large public park, one they envision at Broadway and Third Street – what architects throughout the Connect Kendall competition referred to as the “one-hundred percent corner.” They expressed concern about allowing any of the federal government’s open space to count toward an open-space requirement, because the government could choose to tighten access restrictions at any time.

Separate from the Volpe zoning, but in the larger context of city planning, Thursday was the final day for responses to the citywide planning request-for-qualifications. The city got submissions from five companies: BNIM, Context, Perkins+Will, Sasaki Architects and utile. Sasaki and utile appear to have Boston-based principals in charge of this project.

Because the city did not require electronic submissions, electronic copies of the submissions are not yet available. All the firms include teams of subcontractors, and New York-based HR&A Advisors is listed by all five.