Increasingly locked out of buying homes, teachers to ask district to let their kids in 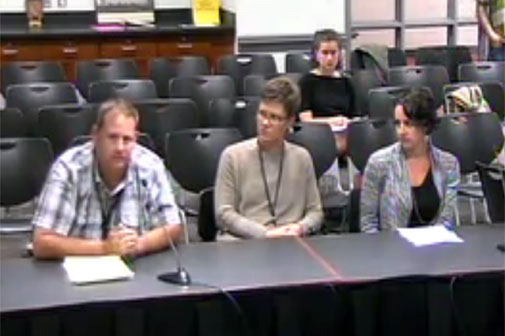 Increasingly locked out of buying homes, teachers to ask district to let their kids in

Another sign of Cambridge’s growing housing gap heard in public comment took prominence at one of the shortest regular School Committee meetings in recent history, where members met Tuesday to pass two grant and gift transfers and a set of subcommittee minutes and vote to finalize revisions to controlled choice policy discussed the previous week.

That was it for business. The meeting was adjourned after 45 minutes.

(The shortest meeting was undoubtedly the 12-minute June 14, 2011, special meeting shut down by three members – including current mayor David Maher and member Fred Fantini – who objected to the way the meeting had been called.)

Already light on administration and committee motions, for the third time in as many meetings this academic year the agenda included no presentations by the superintendent’s office. Asked before the meeting about this absence, Superintendent Jeffrey Young and Deputy Superintendent Carolyn Turk shrugged and either shook their heads or looked blank when it was suggested that this was unusual. Turk and Young did say that the annual discussion of MCAS standardized test results was delayed by the state, which is late in reporting data to districts because it is also coordinating reports about the competing PARCC assessment. [see table]

But during public comment, which committee procedures limit to items on the agenda, rules were suspended to allow folks to talk about two issues.  Four Cambridge public school teachers gave what they called a “heads up” to the committee that there is movement among teachers and staff who do not live in Cambridge to ask for permission to have their children attend Cambridge schools.

“Cambridge is changing,” said Michael Zuercher, a Lynnfield resident and culinary arts and hospitality teacher at the Rindge School of Technical Arts at Cambridge Rindge and Latin School, whose wife is a coach at the Fletcher Maynard Academy. Their two young sons are at the First Steps Day Care and the Kennedy Longfellow Preschool, which are open to non-residents.  “The [school] staff is getting younger. Gone are the days when the majority of the staff lived in Cambridge,” he said, adding that many teachers who can’t afford that still want their children to attend the schools “we work so hard for.”

Teachers spoke Tuesday to ask the School Committee to consider allowing their non-resident children to attend school in Cambridge.

Several other surrounding communities have provisions to allow non-resident teachers’ children to attend their schools, and Zuercher provided the committee with sample contract language from some area districts. Without this benefit, he said, “many young teachers will have to make a tough decision” – whether to go “someplace better for their families.”

“Even with two teacher salaries, we will most likely be unable to afford to actually purchase a home here in Cambridge,” said 10-year CRLS English teacher Ariel Maloney, whose husband Joseph teaches in Cambridge’s Special Start Program. They rent in Cambridge.

The issue will be part of the collective bargaining discussions with the committee if the union decides to move forward with it.

The committee also heard public comment from CRLS student Charlotte Rosenblum about the high school’s dress code. Rosenblum reiterated points presented by fellow student Will McArthur at the summer meeting, who had read a statement by Rosenblum and added comments of his own about the unfairness of a dress code that appears to be invoked against girls much more than it is against boys, regardless of their dress. “Through this dress code,” said Rosenblum Tuesday night, “that states that clothing should not be ‘disturbing to other students’ … the school teaches that the objectification of women is okay, and it never punishes boys for being the objectifiers.”

Members Patty Nolan and Richard Harding were all set to put together a motion to ask the superintendent to see that CRLS administration initiate discussions with the students about revising the dress code, when members Kathleen Kelly and Fred Fantini pointed out that the committee had already passed such a motion at the summer meeting.

The second and final chance to review changes to the controlled choice policy initially passed last week led to Fantini, Kelly and Harding expressing reservations, even as they ultimately voted to pass the revisions. The changes roll back tighter restrictions implemented in 2013 to limit the variation individual schools can have in their balance between poorer and wealthier students. Chief Operating Officer Jim Maloney had argued successfully that the tighter restrictions were “unmanageable” for his staff while also increasing the instances in which families did not get any of their three choices of schools.

Fantini said he preferred not to loosen the policy but is “willing to give this a chance,” even though “this” is essentially the same policy that existed for years and led Fantini, with then member Alice Turkel, to propose the 2013 revisions.

Kelly said she wanted to pass “this for next year,” but wants to revisit the broader controlled choice issues, and wants to see data showing the impact these changes have across schools.

The revisions, though, were finalized in a 6-0 vote (member Mervan Osborne, who alone is not running for reelection, was not present for a second time in the past three regular meetings) and will go into effect with the next lottery. A suggestion by Nolan that a portion of the revisions might start immediately to possibly affect current waiting lists was not taken up by the committee, as some members voiced reluctance at changing rules midyear.

Finally, Maloney announced that the Martin L. King School and Putnam Avenue Upper School Campus students would start moving to their new building on Putnam Avenue in mid-December, with everyone due to be permanently there Dec. 21. The King Open and Cambridge Street Upper Schools will start their move out of their current building Feb. 5.