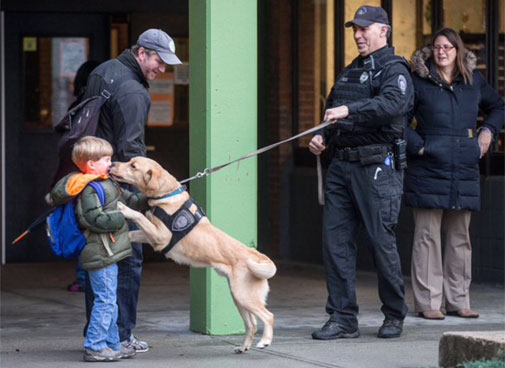 @CambridgePolice K-9 "Rumba" did his best to help little William feel safe on his way to class today. pic.twitter.com/7JqLGORH7H

Only days after clearing campuses from a bomb threat, Cambridge Public Schools received an anonymous, emailed threat of gun violence Thursday against its middle schools. The threats were repeated Friday.

As on Tuesday, when campuses were searched while school went on, school and police officials decided against closing as the threat was investigated, Superintendent of Schools Jeff Young and Police Commissioner Robert Haas announced in the early morning.

This “latest threat” was directed specifically at the Amigos School, Putnam Avenue Upper School and Vassal Lane Upper School – buildings that also contain the Tobin Montessori and Kennedy-Longfellow elementary schools – while on Monday the bomb threat was wider, including the two other upper schools and attached elementary schools as well. The high school faced a bomb threat Nov. 16.

None have been found to be legitimate threats.

“Schools will be open,” the officials said, but “out of abundance of caution,” the buildings had been locked and alarmed since 10:30 p.m. Wednesday, and police and school security conducted a detailed walk-through of the named schools before 6:30 a.m.

Police were investigating alongside local and federal partners, they said, and “it is believed that this threat is likely a continuation of previous threats … police have confidence from their investigations that the same individual is behind the emails.”

Nationally, Wednesday saw two mass shootings – one in San Bernardino, Calif., that killed 14, and one in Savannah, Ga., that killed four – but the threat of mass school violence has hung over schools at least since in 1999.

“If you are at all like me, you are really unsure about just how safe your children will be at school and are unclear on how we, as a school district and as a city, are adjusting, or should adjust, to what seems to be a new world of even more violence and threats,” city councillor Craig Kelley said in a Thursday email.

He said hoped to hold a meeting of the council Public Safety Committee he leads before the end of the year “to more thoroughly explore how we currently handle all aspects of these sorts of threats to our schools and to try to figure out what, if anything, we should do differently.”

This post was updated Dec. 4, 2015, to reflect that gun threats extended to a second day and add Kelley’s comments.