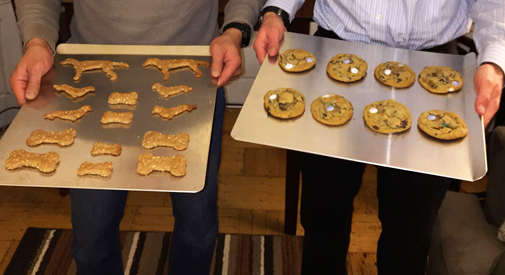 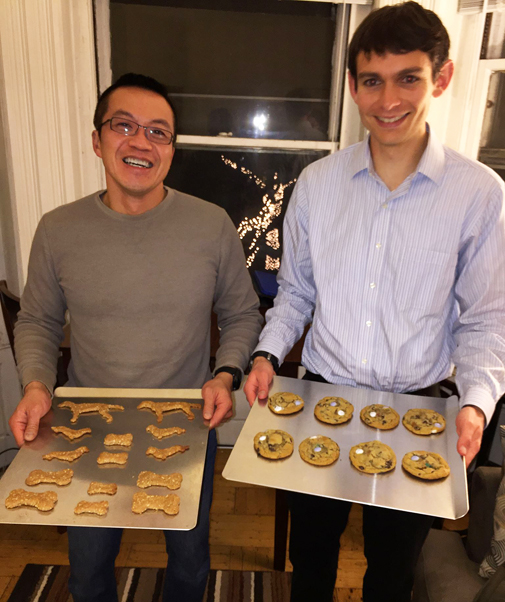 A Cantabrigian and his Boston Marathon running partner are raising money to buy custom prosthetic devices by baking homemade cookies and dog biscuits to show gratitude for donations.

Cantabrigian Tony Chin and Mark Zurlo are part of a 10-runner team hoping to raise $100,000; to boost their efforts as part of the team, they created “HAF Baked” with the goal of baking 10,000 cookies and biscuits to raise more than $20,000 in donations by race day, April 18.

The “HAF” in “HAF Baked” stands for The Heather Abbott Foundation, created in 2014 by Abbott after she was injured in the 2013 Boston Marathon bombings while cheering on runners near the race finish line on Boylston Street. Since having a part of her leg amputated as a result of her injuries, she uses a prosthetic leg.

Her foundation provides amputees with the same type of customized prosthetic devices that she relies on. Customized prosthetics can cost anywhere from $20,000 to upward of $100,000 and are generally not covered by insurance companies, putting them out of reach for many – and most amputees will need more than one to live lifestyles that involve activities such as running, biking or just wearing high heels. Since the foundation got its start, it has provided customized devices for two amputees.

Chin and Zurlo said they were running what they thought would be their “one and done,” bucket-list marathon in 2013, with Chin just having crossed the finish line when the bombs went off and Zurlo stopped at the final turn onto Boylston Street.

It turned the run into an important part of their everyday lives, they said, and both are training for their fourth marathon – now as part of “Team Limb-It-Less.”

Knowing it would be hard to rally financial support from families and friends for a fourth straight year, the two runners created their ad hoc bakery. “It’s always important to show donors how much you appreciate their support,” said Zurlo, who bakes the treats for human. “The cookies are a nice ‘thank you’ and help us start the conversation with prospective donors about what the Heather Abbott Foundation does for amputees.”

For Chin, his from-scratch dog biscuit baking helps strike up fundraising conversations with friends at his local dog park. “I knew many of the friends I’ve made at the dog park would be willing to support HAF if they had a bit of an incentive,” he said.

Chin and Zurlo set up a Facebook page for HAF Baked and plan are releasing video updates throughout the season. Anyone interested in making a donation to The Heather Abbott Foundation and getting cookies or dog biscuits in return can visit hafbakedcookies.com. Donations to Chin at tonysrace.com get the homemade dog biscuits, and as of late February he had raised just over $3,000, or about 30 percent of his goal; donations to Zurlo’s efforts at mzmarathon.com get the cookies. His goal is lower – $7,500 – and he has raised three-quarters of it.