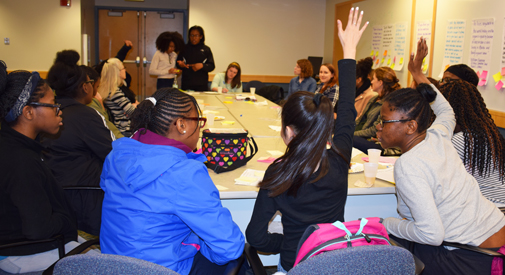 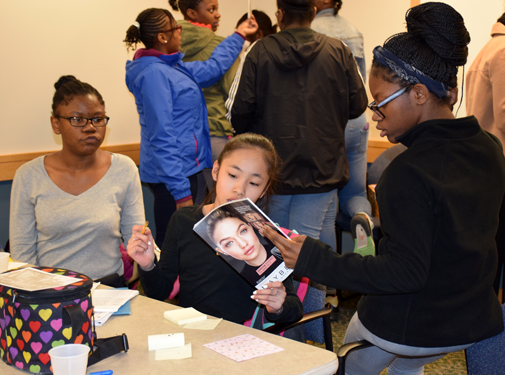 Young participants discuss women’s representation in the media during a Girls’ Media session at Tutoring Plus. (Photos: Monica Velgos)

Complaints by teens of sexist or racist dress codes and protests for more support for sexual harassment victims have drawn attention recently to the high school. Thriving at the middle-school level but lesser-known, though, is a small pocket of empowerment that’s been going strong for nine years.

On May 10, this year’s Girls’ Media program, facilitated by Tutoring Plus of Cambridge, held its yearly wrap-up at the Harvard Democracy Center, a culmination of 10 afternoons of conversations on gender, identity, race, healthy relationships, sexuality and women’s representation in the media. Underwritten by the Cambridge Agassiz Harvard Fund and an Indiegogo campaign, Girls’ Media provided a free learning opportunity for girls in grades six through eight in The Port and East Cambridge neighborhoods to explore topics not often addressed in their classrooms or with as much adult support. “Our main goal was to build confidence in our voices through this community,” program manager Kimm Topping said. (Lesley University was a partner over the past eight years; new partners include Just-a-Start, the Cambridge Health Alliance, Uno Pizzeria, Cambridge Public Schools and Cambridge Community Television.)

The free Girls’ Media program met once a week for 10 weeks at Tutoring Plus.

The event celebrated participants’ videos, speeches, art displays and singing, suggesting how liberating and bond-forming the two-and-a-half month program had been for the 12 middle school girls, their two high school peer leaders and the 12 volunteers and four staff members who were involved.

“It was worth it to hear girls talk about their stories and things that they felt comfortable about. It was also great to hear from the volunteers about their stories,” sixth-grader Keyah Adamson said during her time at the podium to speak during the wrap-up event.

High school peer leader Neyhla Henry agreed. “It was a safe space. Everybody said what they thought, and they weren’t afraid to ask questions,” she said.

The program allows the girls to express their viewpoints, share a meal, ask questions and connect with each other face to face, all while learning about each girl’s unique personality and talents.

Participating for several years added to the experience – especially this year, as a high school-level leader, Henry said. “I’ve evolved over the years, and I feel like I’ve gotten more mindful and wise about media in general, but other topics too, like sexuality,” she said. “It’s different when someone looks up to you. I felt responsible for giving [the younger girls] what they needed. And they did teach me things through our conversations that we had every week. … even though I’m older, I’m learning too, with the younger girls.” 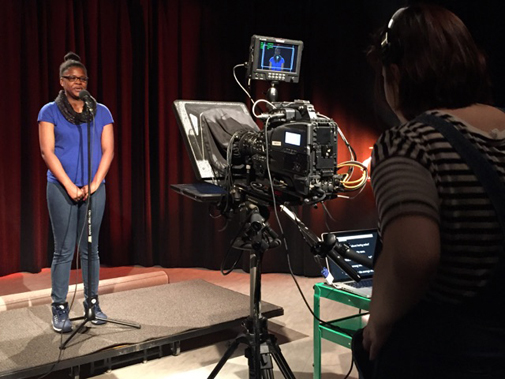 Kelly Fede, an eighth-grader in the Girls’ Media program, makes a video at Cambridge Community Television.

The making of media, and more positive media, was a key part of the program too. The videos the girls created at CCTV displayed the girls’ development: In theirs, the sixth-graders danced expressively as a group to popular songs with positive messages; the eighth-graders, individually and with eyes to the camera, asked rhetorical but pointed questions of viewers: “What’s wrong with my skin? What’s wrong with my body? What’s wrong with my hair?” (Their answers? “Beauty has no skin tone.” “Body size doesn’t matter in order to be beautiful.” “Every hair type is beautiful.”)

Also on display around the room was a “goals” collage for each girl, in which media images were used to convey personal hopes and dreams.

Lastly, after all the girls had received program “memory books,” a parting treat came from sixth-grade participant Angelyna Chreung, who sang “Opportunity” from the soundtrack of the 2014 remake of “Annie.”

“I’ve chosen the song ‘Opportunity’ because Tutoring Plus is a really good opportunity,” she said, right as the tape cued up with the opening bars. “There aren’t a lot of programs that are free.”

Monica Velgos is a freelance writer and parent of a Cambridge Rindge and Latin ninth-grader.