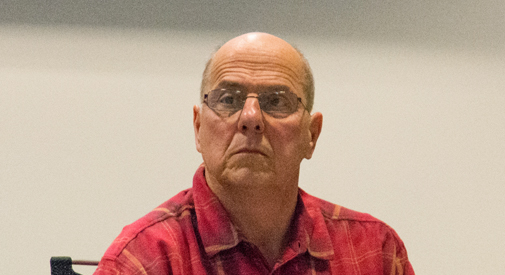 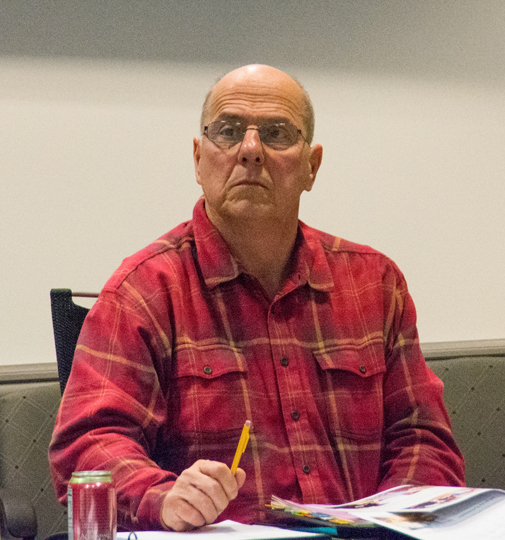 Fred Fantini, member and vice chairman of the School Committee, co-sponsored a motion on charter schools and acted to keep a motion against sexual harassment “friendlier” at a Tuesday meeting. (Photo: Ceilidh Yurenka)

A statewide effort for more charter schools was opposed Tuesday by the School Committee in a 5-2 vote, with Patty Nolan and Manikka Bowman voting against the motion.

During another meeting with a light agenda and yet again no administration presentations, it was one of a few items brought up after being tabled from the previous meeting.

Public comment by five district teachers led into the vote on the motion by members Fred Fantini and Kathleen Kelly.

“When charter schools were first brought into existence, they were supposed to be a place where educators could experiment with educational innovation and then share their new learning with the regular public schools,” Cambridge Street Upper School teacher Mary Elizabeth Cranton said. “That vision did not happen.”

Graham & Parks teacher Rose Levine joined Cranton in arguing that the “creativity and inspiration” to create educational laboratories that could share successes with traditional public schools has not lived up to its promise. They and others also cited lack of accountability and transparency to the local school districts that provide the funds for the schools but have no role in oversight. This year, Cambridge paid $11 million for its residents attending charter schools, among them the three local ones: Benjamin Banneker Charter School, Community Charter School of Cambridge and Prospect Hill Academy. That figure is predicted to rise as annual reimbursements to the district from the state taper off.

CSUS science teacher Donna Perruzi looked at the flexibility Cambridge charter schools are allowed. “There’s nothing that they do that couldn’t be done in our existing public schools, given appropriate resources and support,” she said. Teachers at her upper school, she said, grapple with limits to developing “interdisciplinary projects that we dream of doing, and that some of us used to do, because of district curricula and rigid pacing calendars. These are very real obstacles that get in the way of truly innovative teaching and learning.” Asking if charter schools were required to follow the same district mandates, she addressed the committee: “If you don’t trust our own teachers as professionals, how can we trust outsiders to take our public money and start up schools on their own terms?”

Nolan, saying she was torn, agreed “with most of what people have conveyed,” but wanted to set the record straight on “misinformation,” arguing that charter schools in Massachusetts, and Cambridge in particular, are better than many. Most are not for-profit, she said, including the three Cambridge schools, and she disputed some data on attrition, testing and student body makeup offered in public comment.

More importantly, she said, the committee focus should be on “how to learn from them [and] to seek a respectful collaboration.”

Kelly, however, argued that “this is not a referendum on existing charter schools in Cambridge,” and said her main reason for opposing the lifting of the cap was around the issue of lack of local accountability. “There is no role for a local school committee to have a voice on what is occurring with [their] students,” she said.

Members Richard Harding and Mayor E. Denise Simmons stressed their displeasure with the school “funding formula,” with Simmons calling charter schools “unfunded mandates” for cities. The formula has districts paying individual charter schools for each resident attending that school; the per-pupil payment is the average per-pupil expenditure for the district, and Cambridge’s per-pupil expenditure rate is high – second only to Provincetown in the most recent available data. “If they were to fix the funding formula,” Harding said, “I wouldn’t have any problem with charter schools,” acknowledging struggles with charter schools’ providing of options to the low-income and students of color.

Bowman also said the decision was difficult for her. “I fundamentally support public education,” she said, “and I am also very sensitive as someone [who comes] from a place of privilege if there was any issue with my child, I can make that decision [to go to an alternative school.] I don’t feel comfortable telling a family that lives in a city that’s under receivership that they should not have options that I would have because I come from a certain socioeconomic background.”

“We asked for teacher voice all the time,” said Fantini in support of the motion, “and tonight we heard it loud and clear from teachers who presented strong reasons to support the motion,” referring to the five teachers.

Opting out of PARCC

Another motion tabled previously was one by Nolan and Emily Dexter to communicate with families that there would be no repercussions to students opting out of taking the PARCC standardized test this spring. In being tabled by Harding at the May 2 meeting, the motion essentially became moot – testing wraps up this week.

Initially, state officials said districts choosing to take PARCC for the first time this year, as was the case in Cambridge, would be “held harmless” and not penalized for any slip in scores. But as testing began, the state clarified that schools and districts could be penalized if more than 5 percent of students opted out of the tests at any one school.

But Nolan said she had talked with state Department of Elementary and Secondary Education Deputy Commissioner Jeff Wulfson, who reassured her that if any Cambridge schools are penalized for having 5 percent or more of students opting out, the district should appeal and the department would “take into consideration” that it had been unclear about the ground rules of being “held harmless.” With that update, Nolan withdrew her motion.

Nolan made an attempt to revisit yet a third motion from the last meeting by exercising her right to “file for reconsideration” on a Nolan and Fantini motion to support the Club 1 Feminist club-led walkout at Cambridge Rindge and Latin School highlighting sexual harassment. At issue for Nolan was Fantini’s last-minute editing of his own motion to change the emphasis from “addressing lapses identified by students” to the more affirming “strengthening policies.” Fantini said it was “friendlier,” and he proposed it after Superintendent Jeffrey Young assured members that high school Principal Damon Smith “was on top of the issue.” That revised motion was passed unanimously when a vote was called before members could discuss Fantini’s edit.

Reached afterward, Nolan said she had wanted to allow discussion of Fantini’s rewording because “I was uncomfortable with us watering down the motion, since it undermined the students. Afterward I spoke with several students who expressed their disappointment about taking out any reference to the failure of the district to enforce existing policies. Based on the student comments, it is clear to me that the [school and district] administration and the School Committee did not do our jobs.”

Although the discussion was short-circuited, Simmons announced at the end of the meeting that she is creating a special committee “to better examine and monitor reports pertaining to sexual harassment as well as other gender-based discrimination in our schools and in our wider community.” The committee, she said, will include “leaders and student representatives,” members of the school committee, City Council and the administration, and “will lead the School Committee and the City Council to explore policies that are more responsive and more proactive preventing concerns from bullying and gender-based harassment.”

There was one last tabled motion that reappeared. This was Dexter’s motion that the administration has to inform the committee about district-level staff vacancies, and should consult with them about whether the vacancies should be filled. Dexter had called it simply an extension of existing policies that only the committee can create or eliminate positions. Harding suggested removing the clause about consulting on filling vacancies. Harding clearly supported the spirit of the motion, referring to times “when we on the committee have been surprised to hear” of major staff changes after the fact.

But ultimately a majority objected to passing the amended motion on the eve of Kenneth Salim replacing Young as superintendent, scheduled for July 1, citing concerns about “setting the wrong tone” by passing a motion before consulting on it with Salim. A vote to amend the motion with Harding’s edit was passed 5-2, with Kelly and Simmons objecting on the grounds that they thought any such motion was ill-advised. The amended motion was, instead of being passed, forwarded to Bowman’s ad hoc superintendent transition planning subcommittee.

Passed unanimously were approval of a collective bargaining agreement regarding substitute teachers, a $132,000 contract for special education transportation, acceptance of miscellaneous donations totaling less than $100, and approval of end-of-the-year internal budget adjustments to square accounts.

This post was updated in its headline and photo caption May 21, 2016, to better reflect the nature of motions made at the Tuesday meeting.