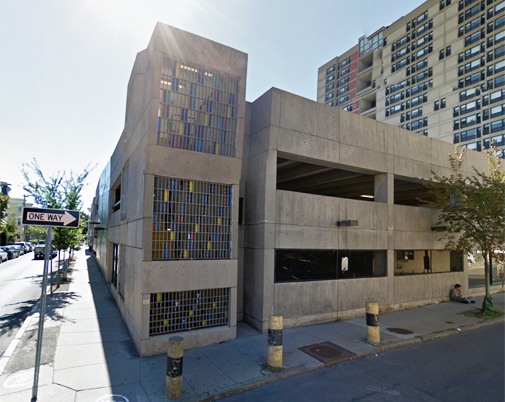 A proposal to add parking spaces to the Green Street Garage’s existing 280 has been sent to a City Council committee. (Photo: Google)

Whether the city adds parking levels to its Green Street Garage in Central Square may depend on how quickly driverless cars change how Cantabrigians get around.

Companies from Apple to Google and Audi to GM are working feverishly on autonomous cars, making tech acquisitions and forming strategic partnerships that might replace the models of car services such as Uber and Lyft almost as quickly and thoroughly as those businesses are supplanting taxis and private ownership.

A free Metropolitan Area Planning Council forum on “Driverless Cars: What Will They Change – and When?” is planned for Monday morning at the Massachusetts Institute of Technology that could give city officials something to think about as they decide an approach to transportation in Central Square, a frequently clogging hub for the T, buses and cars.

“Community discussions about the scarcity of parking spaces in and around Central Square have been growing louder and more frequent,” Mayor E. Denise Simmons said in a Monday policy order, calling expanding existing garage space to accommodate more vehicles an idea that “has not yet been adequately explored.” Local churches are “desperately” in need of parking when they hold events, she noted.

The garage, a 280-space concrete structure at Pearl and Green streets with three aboveground levels, has long been considered “very well used” by city transportation officials. City councillors have asked before about changes to the structure, but whether those requests were made in 2004 to then city manager Robert W. Healy or last year to City Manager Richard C. Rossi – in an order almost identical in concept to the current one – they have brought no response.

This time, councillors opted to explore the issues in their Transportation and Public Utilities Committee before taking it to Rossi or whoever replaces him when he retires at the end of September. (Originally set to retire at the end of this month, Rossi agreed to an extension to ease the transition, councillor David Maher announced Monday. The city is only now undergoing a process to figure out Rossi’s replacement.)

The cause for delay, in large part, is uncertainty over whether Central Square will soon need even the parking it has.

“Even two years ago I’d say we need this, but now I’m in a position of recognizing that autonomous driving is coming very rapidly,” councillor Nadeem Mazen said. Self-driving cars have the potential to “make traffic and parking a totally different issue as late as five years from now, but not much later. We’re in a place where we could conceivably study this [garage expansion], budget for this and achieve this – and find we don’t need it. I think the evidence is quite strong that will happen.”

There was some skepticism from fellow councillors on when driverless cars might be a big enough force to affect policy, but they also weren’t ready to build without first studying the need in Central Square – especially with a three-year citywide development master plan underway. The city’s focus has been on persuading people to get out of their cars and use public transportation or  to walk or bicycle, and developers are being encouraged to add parking underground.

Studies of self-driving vehicles have suggested they could bring a 90 percent drop in car use over a 24-hour period, but Robin Chase, a Cambridge resident and founder of Zipcar and other car- and ride-sharing businesses, has envisioned the future of autonomous cars as being either hellish or heavenly, depending on whether they follow current patterns of single-person ownership or a sharing model:

“While the hell vision results in gridlock everywhere, this heaven vision takes all those personal cars – now parked 95 percent of the time – off the streets and out of garages. We can repurpose those lanes to trees, bike lanes, sidewalks, play spaces, bike parking, café expansion, community gardens or even swimming pools. It’s not too early to consider this alternative universe.”

“The pace at which autonomous cars are coming on is dramatically faster than what people had imagined,” Chase told Nova’s Phil McKenna in January.

There’s another reason to study carefully before adding on to the Green Street Garage, said councillor Dennis Carlone, an architect and city planner: The difficulty of building onto an existing structure makes the project “not inexpensive.”

The Metropolitan Area Planning Council’s “Driverless Cars: What Will They Change – and When?” is planned for 8 to 11 a.m. Monday at the Massachusetts Institute of Technology’s Building 10-250, also known as the Maclaurin Buildings, at 222 Memorial Drive.