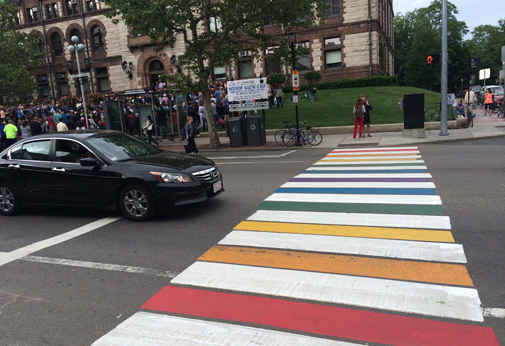 A vigil is held Monday at City Hall after a weekend attack at an Orlando, Fla., nightclub catering to a gay and Latino crowd. Nearby is a crosswalk painted for Saturday’s gay Pride events. (Photo: Marc Levy)

There was comfort Monday for Italian-Americans upset over the loss of Columbus Day in Cambridge as a result of June 6 order replacing it with Indigenous Peoples Day: The City Council reaffirmed all of October as Italian Heritage Month in the city, and Oct. 1 has been designated Italian Heritage Day to kick off the month of celebration.

There was nearly a broader approach taken to reflect the immigrant experience of all cultures and nationalities, reflecting the kaleidoscope of heritages making up the 28 percent of residents who are foreign born and cause for the reportedly more than 50 languages heard on city streets. In the end, attempts to expand the heritage month to all immigrant peoples was set aside to be introduced separately, and the events introduced Monday focused on Italian-Americans progressed alone.

Uproar from outraged Italian-Americans was heard by councillors after they agreed to change the focus of the holiday held every second Monday in October from Christopher Columbus, who has long been identified as a slaver and bringer of genocide, to the Native Americans who suffered after his arrival in the “New World.”

“I had a weird amount of racist backlash on social media. I think sometimes this stuff can bring out the worst in people,” said councillor Nadeem Mazen, who helped bring the idea to the council last fall and led discussions on the issue with vice mayor Marc McGovern. “I just want to make sure that people who watch this … understand that whatever side of whatever issue we stand on, we’re standing for certain issues and ideologies and hopes we have, but we’re not standing against anyone.”

“And certainly when we stand for something in this room, it doesn’t mean people should retaliate with racial overtones,” Mazen said.

A Facebook user identifying himself as a Charlotte, N.C., resident expressed passion about his Italian-American heritage and outrage over the change in holidays in Cambridge in an online conversation Wednesday, saying in reference to Mazen, “Back where I grew up, some scumbag like that raghead would have been taken out permanent real quick!!!” When another participant in the conversation said his comment was “a bit much … too much,” the Charlotte resident responded that “45 years ago in a city that was 65 percent Italian I saw people get taken out. Was just saying.”

Others as well – in this conversation, from outside Cambridge – also expressed disapproval.

“We certainly heard from a lot of folks in the Italian-American community who felt disrespected by that change. It was certainly never the intent,” McGovern said. “I hope this [order] goes toward helping heal any disrespect that anybody felt.”

The vote for Indigenous Peoples Day “failed to recognize the contribution of Italian-Americans in the founding of this country,” said councillor Tim Toomey, asking for the city manager to work with prominent Cambridge Italian-Americans to figure out a format to celebrate their heritage.

McGovern – another target of angry messages since the June 6 vote – praised East Cambridge resident and activist Emmanuel “Manny” Lusardi (who signed up for public comment at the council meeting with his full name, Emmanuel Enrico Josephi Lusardi) for being involved with the process over the course of months, and for his reasoned responses.

It was Mayor E. Denise Simmons who then asked fellow councillors to “take a broad look” at celebrating other cultural and ethnic heritage as well.

Though it wouldn’t be obvious from the past months of prominence for Italian-Americans who feared losing a unique day of celebration, their heritage is hardly the only immigrant demographic in the city, and by far not the biggest. The U.S. Census’ American Community Survey put the Irish as the most common identified ancestry in Cambridge, at 14 percent; Germans follow at 9 percent; Italians and English are tied at 8 percent. (The remainder: the Polish, at 3.6 percent; West Indians, at 3.5 percent; Russians, at 3.4 percent; Subsaharan Africans at just over 3 percent, and French at just below; and the Portuguese at 2.5 percent.)

“We’re a nation of immigrants … certainly Italian-Americans have experienced discrimination, but probably no more than any of the other immigrant communities in Cambridge,” councillor Jan Devereux said. “Does the Portuguese-Brazilian community then come and say, ‘Where’s our month?’ We can widely acknowledge to the community that all immigrants need to be celebrated.”

Councillor Dennis Carlone, himself an Italian-American, agreed – noting that his immigrant father became a boxer to defend himself against the threat of anti-Italian violence. “But as somebody who loves history, I sadly learned not only that the Italians were mistreated, but that we could go right down the list to every ethnic group there is, including today’s difficult recognition of what happened in Orlando.”

A community vigil was held just before the council meeting at City Hall in solidarity with people affected by an attack over the weekend at an Orlando, Fla., nightclub catering to a gay and Latino crowd. Fifty people were killed and even more were injured in the biggest mass shooting in U.S. history. Republican presidential candidate Donald Trump, responded by citing the shooter’s Muslim background and Afghan heritage and renewing calls to ban Muslim immigrants from entering the country from anywhere with “a proven history of terrorism.”

But Simmons opted to preserve the policy order by Toomey and councillor David Maher for solely Italian-American recognition. Toomey and she would introduce an order next week to recognize everyone else’s ethnic heritage, she said.

It was unclear how the celebrations for Italian-Americans and other immigrant heritages would work together.

“I’m going to leave that to the people that will work on it. I’m sure there will be a process through which people will sit down and talk about it and work it out,” Simmons said after the meeting.