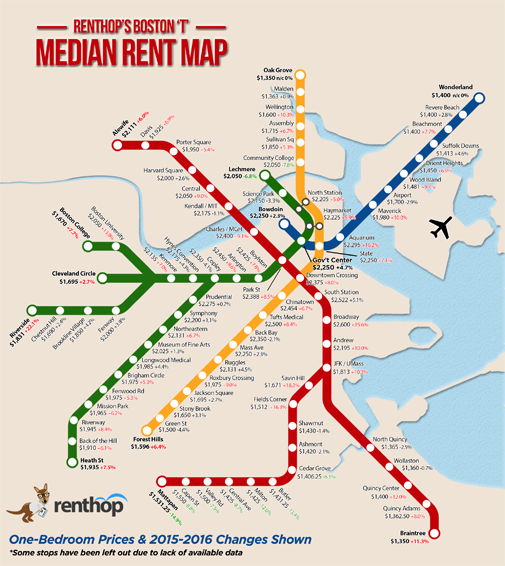 Looking to relocate near a T stop in Cambridge or Somerville? It’s cheapest to rent in Davis Square at $1,925 (but per square foot, also among the cheaper places to buy), even though rents are up 6.9 percent from a year ago. And asking rents are most expensive in Kendall Square at $2,175 (and also among the most expensive places to buy), even though landlords have lowered rates 1.1 percent from a year ago.

That’s according to RentHop, an apartment search website with three former Massachusetts Institute of Technology students among its key staff, which sent out this map of median rents for one-bedroom apartments June 30. The team looked mainly at apartments within 500 meters of a T stop, or about 0.3 mile. Click on the image to go to the RentHop blog post.

Shane Leese, a New York-based data scientist at RentHop, warned not to over-interpret data from the map. “The figures don’t always represent what people are paying, but the asking prices for what’s on the market,” he said. “And it doesn’t mean the prices are changing for everybody, but that more units have come on the market at those prices.”

He also helped speculate on the meaning of some of the movement on the map, and learning about the likely coming of the green line extension adding six T stops through Somerville and Medford – and, with it, more development and apartments on the market – helped bring aspects of the map into sharper focus. “In New York, what affected our prices was the possibility of train closures. It caused a drop in rents all along that line. People were looking to move, and landlords knew that once it shut down it would be harder to fill the spaces,” Leese said.

The drop at Lechmere, where the station will be moved across Monsignor O’Brien Highway and shuttles will replace T service for a possible 17 months of construction, suddenly made sense. “That explains it perfectly,” Leese said. “People are looking to get out and landlords are desperate to get tenants.”

There will also be an effect on the orange line serving Somerville, which saw increases of 5.3 percent at Sullivan Square (technically in Charlestown, but serving East Somerville) and 6.7 percent at Assembly Square; and 10.3 percent on the Wellington stop in Medford. The coming of green line stops should slow their increases. “After construction subsides and things stabilize, there’s no reason for rents to continue to rise like this. When a new area comes on the market, you need to stay competitive to avoid losing renters,” Leese said.

A couple of months earlier, a company called Estately looked at average prices of home, condo and townhouse sales within a half-mile radius of each stop, creating a map that doesn’t quite line up with RentHop’s approach, but is an interesting counterpart. Clicking on the map opens a window to better see the figures: 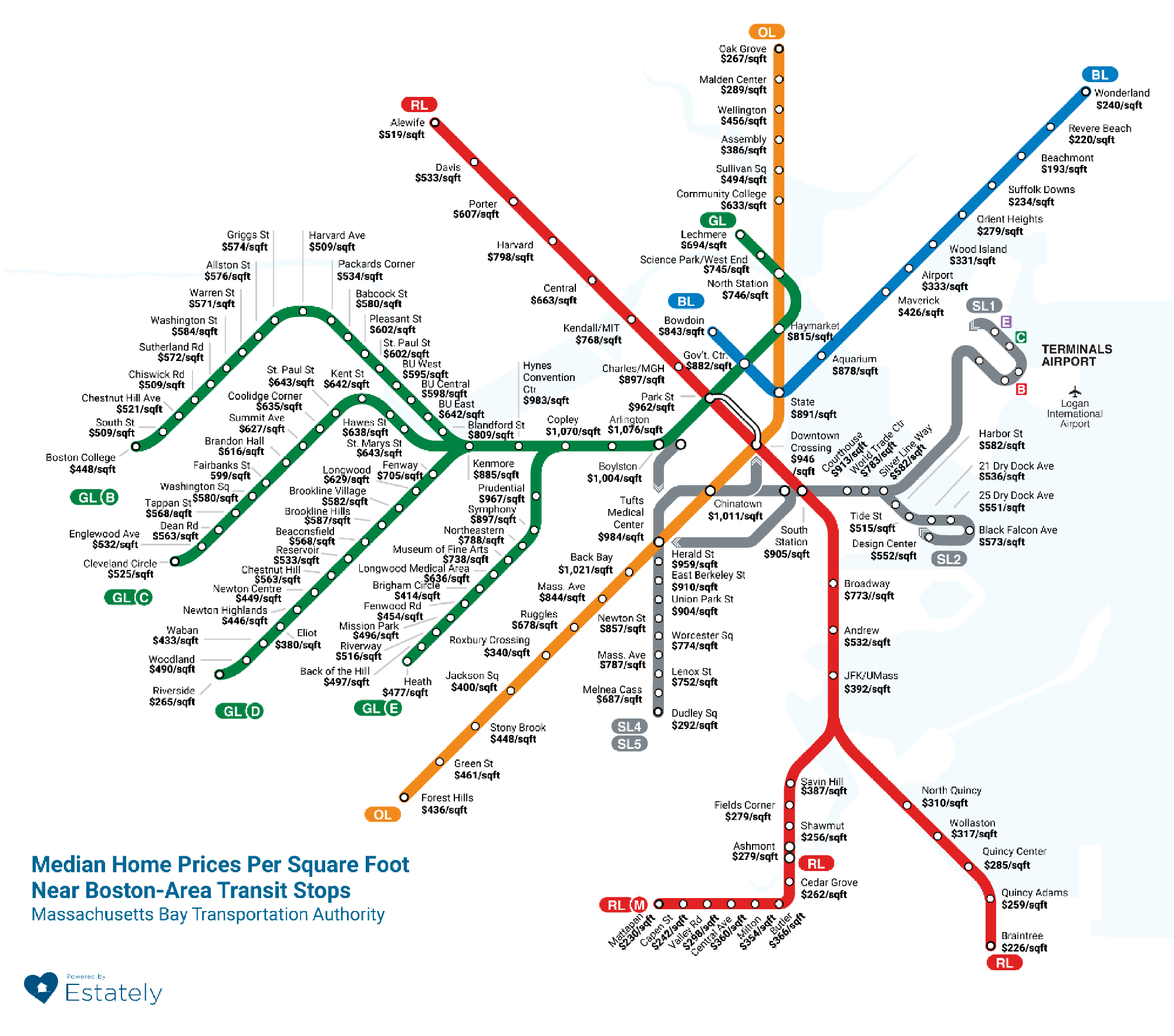 We limited the RentHop and Estately data into an interactive table to make the figures easier to compare, and added the difference index to show what happens when RentHop’s one-bedroom rents are divided by the Estately square-foot figures – the lower the figure, the smaller the difference between renting and buying.

The result makes it clear that the biggest difference between renting and buying is in Alewife, which has the lowest cost per square foot to buy but the second-highest median rental rates.