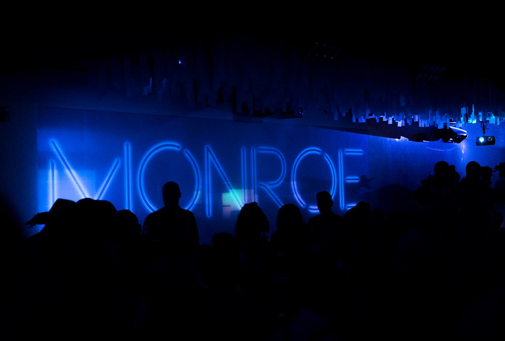 The nightclub Monroe has come under for fire for recent incidents of violence inside and outside. (Photo: Monroe)

The rowdy Monroe nightclub in Central Square could be forced to close earlier and let in fewer people after a series of recent violent incidents landed its managers before the License Commission on Tuesday. The ruling could come as soon as next week.

The lengthy hearing, which heard testimony from several police officers as well as Monroe owner Solmon Chowdhury and manager Brig Dauber, focused on a June 9 incident in which a woman was tasered during a fight, a June 12 shooting that outside the club that injured a bystander in the foot and whether employees interfered with a police detective trying to track down a customer June 24.

There have been 321 calls for police to Monroe’s address at 450 Massachusetts Ave., in Central Square, in the past year and a half, 41 of which resulted in a formal incident report being filed, said Rebecca Leonard, a Cambridge Police Department crime analyst. Because the data she used might pick up the occasional call to that address during the daytime, which would have nothing to do with the club, she also broke out figures for calls between 1:30 to 3 a.m., when people would be leaving after a night of drinking and dancing and potentially lingering on nearby sidewalks to talk before heading home for the night. She also noted incidents police believed to be related to the club but not at its specific address, including two times a gun was fired at a nearby parking lot but nobody was hurt.

Chowdhury was hesitant to accept every reported incident as being connected with his club, pointing out Central Square’s ongoing issues with the homeless, drugs and occasional violence, as well as the fact that a number of bars and nightclubs let out at the same time at that area, putting some 3,000 people onto the streets at the same time with “not enough police officers” to keep the peace. He pointed to The Middle East, where four performance and club spaces including ZuZu held far more people than his restaurant and club’s occupancy of 480.

“The crowd you draw is an inherently dangerous crowd,” Reardon told Chowdhury.

Murati Ferrer redirected the conversation slightly. “I want to make it very clear for the record,” she said, “I don’t think this commission or anyone in Cambridge is telling you not to allow a certain type of crowd into your establishment. I think you just have to be really careful, when you have events, that you have proper security and are running a safe place.” 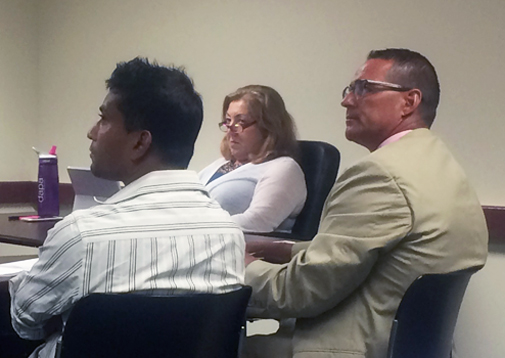 Monroe has up to 15 bouncers working weekend nights, and with The Middle East contributes to a fund that pays for a police detail for outside the club, Chowdhury said. People coming into party are patted down to ensure they are not carrying weapons, and although police testified Tuesday to encountering “shoulder-to-shoulder” crowds inside, very drunk people and the smell of marijuana, most violence has taken place outside the club.

Still, Chowdhury’s clubs have racked up a troubled history. His Harvard Square nightclub, Om, closed in January 2013 for similar problems, including a massive, hourlong series of fights in late 2012. It had been hit with a five-day suspension for various licensing violations, including over-serving and overcrowding, shortly before closing its doors.

In 2012, he took the 11,000-square-foot space at 450 Massachusetts Ave., which had been built by the Massachusetts Institute of Technology and put on the market in 2008, but remained tenantless and empty for the next four years. He opened the restaurant Moksa in the front space and used the giant hall at the back for the attached nightclub, Naga. Both were rebranded into Monroe, a combination restaurant and nightclub, in January of this year, but not before the fighting at Om had a sequel at Naga in May 2013, when an aggressive 400-person crowd and several fights drew three-quarters of the city police department and the entire MIT Police force to the scene.

Chowdhury told commissioners that he grew up in Central Square – had even been a victim of violence and hate crimes there – and opened Moksa and Naga in part to enliven a part of Central Square that had been languishing. As he transitioned the space into Monroe, his attorney Sean Hope explained that it represented Chowdhury’s maturation into his mid-40s as he focused more on restaurants and less on clubbing. “Naga is well-known now for certain kinds of nightlife,” Hope said. “He wants to shift to a more upscale crowd.”

“We spend a lot of money on security and details and we do everything we can to control what happens in our club,” Chowdhury said, noting that he has recently ordered his hired security to be more aggressive in asking crowds to disperse after closing. “We want to be part of the solution there. We also need help.” 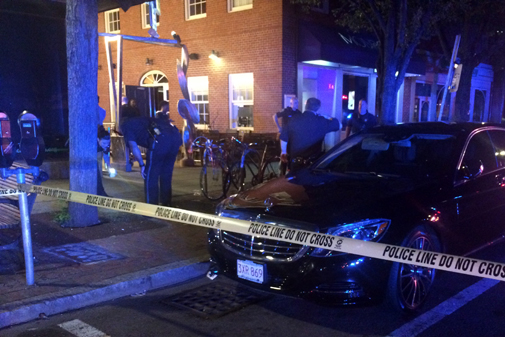 Police search for shells from a shooting by Monroe on June 12. (Photo: Marc Levy)

While at least one issue the commission investigated Tuesday was largely defused, as the police detective who came to Monroe asking for a customer wasn’t readily identifiable as an officer, its members responded with potentially damaging skepticism and outright disbelief to some of what Dauber had to say.

The club has 12 cameras but thanks to a broken DVR only two record, Dauber said – unhelpful in finding the person who fired several shots June 12 and hit a woman in the inside of her left foot, leaving a spent shell casing embedded in her shoe, according to a police report. The device was broken at the time and hasn’t been replaced, and Dauber had no good answers when Burke asked why. The exchange came after an officer reported that Dauber had suggested to her that the shots had come from as far away as The Asgard, a restaurant and pub about a tenth of a mile to the east past a park and an intersection, though Dauber said he’d merely suggested checking Asgard video in case the shooter ran that direction.

Then Dauber told commissioners that, despite his long history as a club manager, because he’d never smoked marijuana he couldn’t be sure he’d detected it being smoked or vaped in Monroe, where there are other smells such as those from the kitchen and fog machines.

“You’re the manager of record and that’s your testimony?” Reardon scoffed. “It’s bizarre.”

Burke’s predecessor leading the police department on the commission, Robert C. Haas, had gone so far in July 2014 as to try to dissuade the Clover food chain from opening a 24-hour restaurant in Central Square because of recurring violence down the street. But in January, as the Monroe rebranding was approved, Haas acknowledged that things had become quiet in that part of the square, crediting it to “a business decision” and not due just to colder weather sending patrons home sooner.

The club has also recently canceled a couple of events its managers thought could get out of hand and has ended its weekend valet service in an effort to get traffic moving sooner after the nightclub lets out, Dauber said.

“We are on the same page as the Cambridge Police Department” in seeking an end to troubles at the club, he said.

Commissioners said they would take the testimony they had heard under advisement and announce their findings possibly as soon as next week, with possible remedies including an earlier closing time and lower occupancy.

The Cambridge Observer channel on YouTube has posted videos showing the hearing: