‘Suicide Squad’: In crew forced to do good, only the damaged, funny Quinn does well 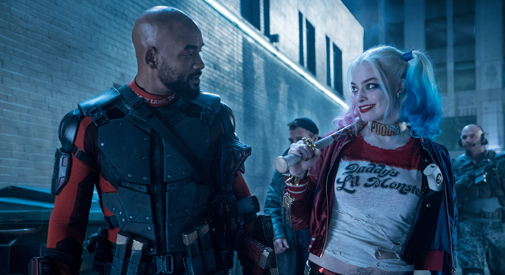 ‘Suicide Squad’: In crew forced to do good, only the damaged, funny Quinn does well

There’s a drought across the land, and I’m not talking about the arid state of farming or sweeping brush fires, but the strangled flow of quality films on their way into theaters. We’ve already suffered through “Batman v Superman,” and Matt Damon, while jacked up for “Jason Bourne,” was hogtied by an inert script. Now here comes “Suicide Squad,” another DC Comics entry (think Superman and Batman), looking to take a bite out of the Marvel pie (think Captain America and The Avengers). Hyped as a quirky anti-superhero flick, the project showed great promise during incubation; now, in realization, it’s a busy, bombastic bounce that bites off more than director David Ayer can chew. 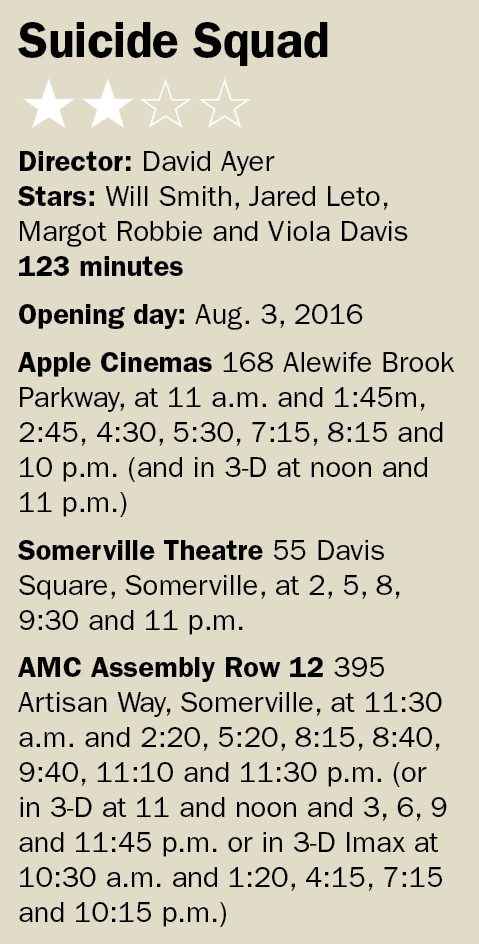 If you’re not familiar with Ayer, he’s a guy’s guy, the testosterone-probing hand behind such brooding character studies as “Harsh Times” and “Fury.” He doubles down here, tackling script-writing duties as well, and in that you’d think he’d own the material and put his stamp on it. But what becomes clear in the first few frames, as we get a seemingly ceaseless recap of the potpourri of criminal personas that will become the Squad, is that Ayer’s not a very nimble multi-tasker. We’re left down deep in the liftoff-weeds water when there should be action, heroics and a sardonic edge – i.e., plot and forward motion.

Eventually we get there, as covert-ops head Amanda Waller (Viola Davis) seeks to enlist imprisoned “metahumans” to form a special squad ready to throw down should an uber-being such as Superman decide to kidnap the president or perform some other arch-evil deed. The metas are about as well respected by humans as the mutants in “X-Men,” even though they could crush you without breaking wind. Among the crew you’ve got Deadshot (Will Smith), the gonzo gunman who can’t miss; Diablo (Jay Hernandez), a flame-throwing gangbanger with Mike Tyson face tats; the scaly Killer Croc (Adewale Akinnuoye-Agbaje); and Aussie homeboy Boomerang (Jai Courtney). How they get apprehended – by Batman (yes, the Ben makes a brief appearance) and the Flash – makes for thrilling nuggets, and about as good as the film gets until the Enchantress (Cara Delevingne), a 1,000-year-old witch who resides in a mild-mannered archeologist’s body and is romantically involved with special-ops commando Rick Flag (Joel Kinnaman), decides humankind is a disrespectful turd that requires flushing.

Yup, that’s it, and it’s up to the Squad to thwart her Ty-D-Bol rage. Flag, Waller’s lapdog, has the unenvious task of leading the Squad (they’re under his thumb via surgically implanted explosives that can be triggered by an app), but herding cats would be easier.

The best thing about the film by far is Margot Robbie (“The Wolf of Wall Street”) as Harley Quinn, the sassy goth girl in short-shorts with a New Yawk accent who’s pretty good with a baseball bat, not to mention pretty batty – the Joker (Jared Leto, channeling Jim Carrey’s Riddler) gave her electroshock therapy as part of their courtship. Yeah, they’re an item, but the Joker’s not part of the team; he’s the fly in the ointment who wants his gal back.

Robbie puts a lot into the role. It’s a winning turn that almost saves the film and is sure to give fanboys a rise. A flick about Ms. Quinn would have been the ticket, and while Ayer is wise to give her plenty of screen time, there’s also Will’s Deadshot – nowhere near as interesting – jockeying for the front stage, not to mention Enchantress speaking in tongues with her orange, glowing brother, who looks like something escaped from one of Trump’s failed casinos. Pure cockamamie when you get down to it, and at times downright incoherent. I’m guessing the film was up against a three-hour wall and the execs gave it to an editor to hack it down to a neat two. Call me crazy, but I see a director’s cut coming when this goes to second life.

I’m not sure why, but it seems the only way superhero flicks exist is that the entirety of humankind must hang in the balance and every hero must have a haunted past, some dark skeleton that requires plumbing at every critical juncture. Sometimes it works, sometimes it doesn’t, but it’s repetitious. For me I’d just be happy to follow Ms. Quinn for a day at the mall. Cyndi Lauper’s “Girls Just Want to have Fun” would be the anthem. Leave the Joker at home. Ah, missed opportunities.