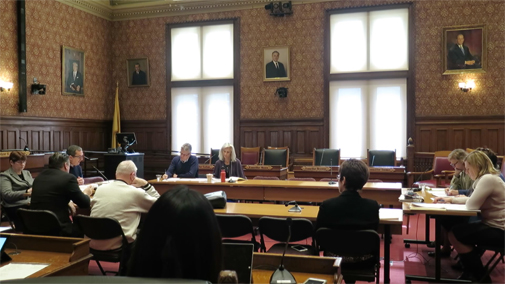 One meeting with candidates or more? In April, it seemed like more
By Marc Levy

City councillors defended the city manager search process Monday against criticisms of a lack of public access, especially now that three finalist candidates have been chosen in the run-up to a Sept. 29 vote – only one day before City Manager Richard C. Rossi leaves office (though he has vowed to help with a transition period).

In the criticism of their critics, however, came the admission that some of the misunderstanding about the number of public meetings promised came from what was described as a typographical error committed by the city on its official search process website.

Despite that, David Maher, the city councillor who has led the search process, was dismissive of complaints. “As we typically see, there’s a lot of misinformation floating around that sounds like fact when people repeat it. The original schedule called for one town hall meeting,” he said.

A look back at that original schedule suggests Maher is wrong.

The plural public meetings were reported in the media dating back to April, when Maher first presented a city manager search timeline at his council subcommittee on Government Operations. Documents released by Maher’s subcommittee referred to meetings, plural, as did Maher himself in leading that April 6 discussion of a multi-step search process.

“There will be a very public process … we’re suggesting in Step 10 that there be public ‘town hall’ meetings where the community will have an opportunity to engage separately with all three finalists,” he said. “It’s an opportunity for the public to hear each of the finalists’ vision and to take questions from the audience so you get a feel for how people kind of interact with questions and with the public. Those meetings would occur prior to the City Council public interviews.”

The defense of the search process made Monday also included information about the schedule and rules for deciding on a city manager that was was news even to other councillors.

Two speakers during the meeting’s public comment period were upset that a forum starting at 6 tonight would be the only direct public access to the candidates, one of whom will run the city in the coming years, and that it would take place while the School Committee met and the Planning Board and Cambridge Redevelopment Authority heard a plan to add nearly 1 million square feet of development to Kendall Square.

“While I understand there will be a conflict just about any time you schedule something like this, these are two important meetings that were already on the calendar long ago,” said East Cambridge resident Heather Hoffman, reminding councillors that there were “meetings, plural, that we were promised in this search.”

Civic-minded East Cambridge residents might be torn between meeting the candidates and hearing about the development proposal – and face another conflict Sept. 29 between the council vote and the tentative first meeting of the group helping decide the fate of the giant Volpe parcel, also in Kendall Square.

“One of the reasons for having more than one meeting is to make conflicts less of an issue by providing people more than one opportunity” to see and talk with the candidates, Hoffman said.

Along with other complaints about the process, James Williamson, of North Cambridge, agreed with Hoffman on the scheduling: “One isn’t enough, and we were promised meetings,” he said, stressing the plural nature of the word.

Maher rebuked the critics about spreading “misinformation,” though he then acknowledged: “I went back and I looked and said, ‘How could someone misinterpret this?’ – and online there’s a place where there’s a plural of the word ‘meetings’ where it shouldn’t have been.”

The plural use seems to be based on Maher’s own words in April, though.

The April 6 subcommittee meeting wasn’t televised, but it was filmed and released on YouTube by independent journalist John Hawkinson, who posted it on Cambridge Day. The full version:

The council has a poor history with replacing city managers, though all the history is recent: Robert W. Healy was in office for 32 years before retiring in 2013, and Rossi was his deputy manager the whole time. Rossi was promoted to replace Healy on a three-year contract.

In 2010, councillor Craig Kelley saw Healy’s retirement coming and proposed a process to figure out a replacement, but his fellow councillors at the time quashed the idea, excoriating Kelley as being “insulting” and ageist. Two years later, as Healy’s retirement neared, Maher was put in charge of creating short- and long-term plans for hiring a city manager, but the process crawled along with few meeting dates and little action before collapsing. A nine-month extension on Healy’s time in office was intended to enable those processes, but instead led to the council selecting Rossi to replace him, with Kelley saying, “It’s a question of us doing or not doing our jobs, and we did not. We abjectly failed … frankly, I’m embarrassed.”

Similarly, Rossi’s contract as city manager ended three months ago, but he agreed to work through the summer to give the city and Maher time to find his replacement. The announcement of the city manager search process timeline and of Rossi’s willingness to stay on for three months – and then provide for a smooth transition – arrived on the same day in April.

A 15-member screening committee winnowed candidates from around the nation to the three announced Thursday: Louis A. DePasquale, the city’s assistant city manager for fiscal affairs since 2002; Robert “Jay” Ash Jr., secretary of the Executive Office of Housing and Economic Development for the state; and Paul J. Fetherston, currently assistant city manager in Asheville, N.C.

City councillors who weren’t on the screening committee got information packets about the candidates Friday. Most of that information was made available to the public Monday, leading to today’s candidate forum for which residents were invited to submit questions to the city’s search consultant, GovHR USA, to be passed on to the three finalists. The meeting will end with a chance for the finalists and residents to mingle, when the candidates might take questions directly.

Wednesday brings the council’s official interviews with the candidates, with a chance for public comment following. When the council meets again to choose a city manager from among the three, there will be a public comment period at the start, Maher said. There will also be “feedback forms” available in person and online for people to express their views, he said.

It was the first public explanation of those opportunities, despite the official search website vowing to provide updates on the search, meetings and public forums.

“Councillor Maher’s clarification of the opportunity to provide comment and even raise questions in those three instances is something I didn’t realize, and perhaps I’m not alone in that,” councillor Dennis Carlone said. “It’s certainly broader than what some of us thought.”

Maher stressed also that the meetings with city manager candidates would be televised and could be streamed online by the curious, but Hoffman said she was no more swayed by that argument than when emailed the same information earlier in the day by Maher’s aide, former School Committee member Fran Cronin.

“It’s skirting the issue. I’m not saying there’s not an opportunity to see the candidates. The issue is the opportunity to question them,” Hoffman said.

The official website also says the Wednesday meeting of the council could include a closed-door session for “contract negotiations with the prospective city manager,” even though the council isn’t voting for a city manager until the next week.

“As often as I feel things are manipulated in various ways, I was quite shocked when I read that list,” Williamson said.

Maher took efforts to knock down that complaint as a myth and stressed that “some of the 50 people that applied but were not selected to be on the committee” would also get chances to talk to the city manager candidates.

“I want to just assure people that in my conversations with the folks at GovHR, they stated to me that this is the most transparent and the most involved community process that they had ever worked on in all of the communities where they have run city manager searches,” Maher said, “and I think they will probably say that [Tuesday] night and say that again on Wednesday.”

“With all due respect to one or two of the folks questioning this process and some of the emails really bringing up issues of some grand conspiracy, I gotta tell you – that individual could have 10 meetings alone with these three candidates and complain they didn’t have the 11th,” McGovern said, referring to Williamson specifically and a group of around seven people who were most cynical about city government. “I’m a little tired of that beating drum.”

“I would never say that we’re perfect or couldn’t be better, we certainly can, but we set a very impressive schedule to hire the next city manager and that schedule was met,” McGovern said. “Look back and some of the same people complaining about this process [were vocal when] Mr. Rossi was hired and complained about that process. So we went out of our way to make sure we did something 180 degrees different than what happened last time, and the same people are still talking about how it’s not enough.”