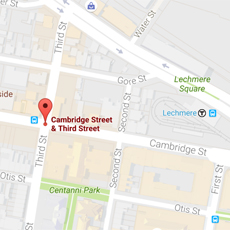 A low-key car chase after a stolen ambulance ended Tuesday evening with minor damage to a police cruiser, authorities said.

Cambridge Emergency Communications got a call at about 5:08 p.m. from Pro Ambulance Dispatch that one of its ambulances had just been stolen from a local hospital – but was stopped at the traffic lights at Cambridge and Third streets, recounted Jeremy Warnick, director of communications and media relations for Cambridge police.

A police officer drove up in time to see the ambulance moving on Third Street toward McGrath Highway, and was able to position his cruiser in front of the ambulance at Gore Street, stopping the ambulance, Warnick said. The officer got out and ordered the driver to put the ambulance in park and turn it off.

The driver tried to comply, but the ambulance lurched forward into the police cruiser, causing minor damage. There were no injuries, Warnick said.

The driver was identified by police as Everett Goss, 48, a resident of the Caspar Emergency Service Center homeless shelter at 240 Albany St., Cambridgeport. He was arrested without further incident and will be charged with larceny of a motor vehicle and driving without a license.