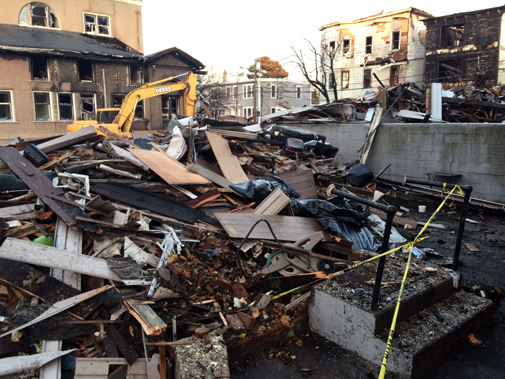 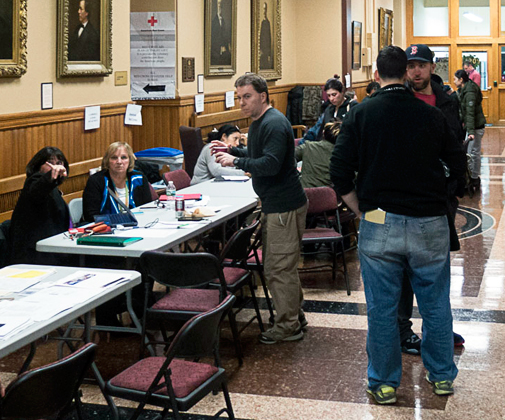 Fundraising for fire victims passed $421,740 – more than 84 percent of the half-million-dollar goal – Monday evening, as the City Council voted to suspend action and wait a week on its agenda so councillors could focus on recovery work with constituents.

With a variety of city departments using makeshift folding tables outside council chambers to handle the registration and needs of people displaced by Saturday’s 10-alarm fire, the council met for only about five minutes to hear a statement by Mayor E. Denise Simmons.

The fire began just before 3 p.m. Saturday on Berkshire Street, in the Wellington-Harrington neighborhood near Kendall Square. Simmons’s statement said it affected “as many as 11 buildings” and displaced some 100 people. “We are truly fortunate that there are no reported serious injuries and that there are no reported fatalities,” she said. “To those who witnessed this fire, to those who saw the footage of it, I think we can all appreciate how miraculous this is.”

A GoFundMe page set up by the city and mayor (also available online at cambridgema.gov/firefund, and checks can be sent to the Mayor’s Fire Relief Fund, at Cambridge City Hall, 795 Massachusetts Ave. Cambridge MA 02139) is taking financial contributions, which are the only kind being accepted for now. “Right now the city does not have the capacity to accept [other things],” Simmons said. “This is going to be a long-term effort and the city will continue to support all the impacted families and individuals for the long haul.”

As of 4 p.m. Monday, 48 families and around 102 individuals had been registered for help with everything from filing insurance claims to getting temporary shelter and starting to figure out long-term housing possibilities, Simmons said.

“The city cannot help people who are not registered,” the mayor said, promising continued efforts throughout the week in City Hall and pointing people who could not come in to call a city hotline at (617) 349-9484.

The fundraising figure continued to rise steadily throughout the day and evening, with uncounted checks likely nearing the $500,000 goal.

“We have witnessed a tremendous outpouring of support,” Simmons said.

CambridgeSide mall management said Tuesday that it had its own offer of aid, in which it encouraged “residents, office workers, partners, businesses, stores and shoppers” to donate gift cards for necessities, dining, clothing, groceries, toys and other needed items, and would start the campaign off with a $10,000 donation of its own.

The gift card drive will run through Monday, with donations accepted at the mall’s second-level Welcome Center and all gift cards distributed to families before the holidays, a press release said.