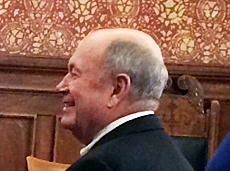 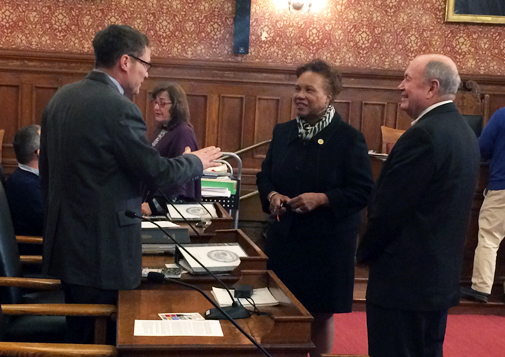 The police department got its third leader in less than nine months Monday as Brent B. Larrabee became acting commissioner and city officials described the process for getting a permanent leader into office – perhaps by July.

Larrabee has led forces in Framingham and in the Connecticut communities of Stamford and East Haven. He was interim chief in Westwood for nine months in 2003 after being recruited by the departing 12-year chief, Robert C. Haas – the same Haas who led Cambridge’s police department for nine years before retiring in May. History repeated as he recruited Larrabee again for an interim role, this one expected to last six to eight months.

Larrabee was in the Caribbean with his wife when Haas called him aboard a cruise liner. “Bob, I think you’re breaking up,” Larrabee said, recounting to city councillors how he came to be sitting before them.

Between Haas’ retirement and Larrabee’s arrival, Chris Burke served as acting commissioner for eight months, then retired Jan. 6 after 32 years of service instead of joining the search for a permanent commissioner.

“The commissioner’s job here is probably [ranked] 1, 2 or 3 in prestigious jobs in police administration,” Larrabee said. “I couldn’t really say no.”

Between his work doing high-paid consulting – including as a police adviser in Nigeria and around the BP oil spill in 2010 – and his experience with large governing bodies, cities and police forces, his biography was high in likely qualifications for long-term leadership in Cambridge. But limitations of a previous retirement package and other matters meant “I have no interest in being permanent,” he said.

Instead, City Manager Louis A. DePasquale will run a search process similar to recent searches for a schools superintendent and for DePasquale’s own position, which he assumed Nov. 14. The difference is that while the School Committee voted for superintendent and the City Council appointed DePasquale, the appointment of a police commissioner is the responsibility of DePasquale alone.

Still, the choice begins with the selection of a firm to run the search. A request for quotes brought in bids all over a $50,000 limit, and the city plans to return to the firms to see if they can revise their bids to come in under, DePasquale said. The other option would be to switch to the “request for proposals” process for bids of more than $50,000, a process that could mean a delay of close to two months.

Residents can expect just short of a dozen meetings, some open to all and others for segments of the community, to get a sense of priorities for the next commissioner and to develop a leadership profile by mid-February. A recruiting and screening process should bring forward eight to 10 candidates, who will go through a screening committee, DePasquale said.

A smaller group of candidates will get site visits and be presented at town meetings in a “very open process,” DePasquale said. “The residents will be heard.”

DePasquale hoped to make a decision in late April or early May, with the new commissioner starting possibly in July.

At this early stage, councillor Craig Kelley said simply that he encouraged the city to be “imaginative” during the recruiting process, but councillor Nadeem Mazen said he hoped to see an improvement over the shortcomings of the city manager search that ended with DePasquale’s promotion from within. “We did get lucky,” Mazen said, but the search seemed underfunded and resulted in a pool of little diversity and a lack of vigorous outreach beyond the borders of Massachusetts. The amount allocated for the search was “wildly off,” Mazen said.

“The good news is, this is a prestigious position,” DePasquale said of the commissioner job. “I believe we will attract a strong group of candidates.”

This post was updated Jan. 24 with Brent B. Larrabee’s wage information.