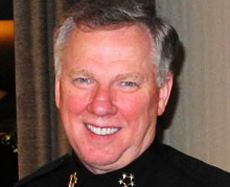 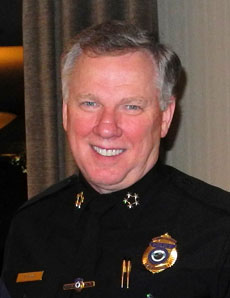 Police Commissioner Robert C. Haas is retiring after nine years leading the Cambridge Police Department, effective at the end of his contract in May.

“This decision has been one that I, along with my wife, have deliberated over for some time and it is not an easy one,” Haas said in a letter distributed to the department’s 272 sworn officers and 40 civilian personnel, whom he has led since 2007 – from old, ramshackle headquarters in Central Square to a new facility in Kendall Square and through such notable incidents as the arrest of Harvard professor Henry Louis “Skip” Gates Jr. in 2009 and the search for the Boston Marathon bombers in 2013.

He has been in law enforcement for three decades, including serving as the secretary of public safety for the state, responsible for oversight of the State Police, Department of Corrections, National Guard, the Department of Fire Services and other criminal justice and public safety agencies. Before arriving in Cambridge he also served as undersecretary and later as secretary for law enforcement and homeland security under Gov. Mitt Romney.

While commissioner, he helped create a Police Innovation Conference hosted near police headquarters in high-tech Kendall Square, and oversaw a city with bursts of terrifying violence that stood out mainly because of record-low crime rates.

“Bob’s departure is a loss for the city. His leadership has resulted in the transformation of a great police department into a nationally recognized police department. He has built a cohesive and progressive leadership team while fostering strong ties and lines of communication with the community, rank-and-file officers and city departments,” City Manager Richard C. Rossi said in a Tuesday letter to the City Council

“While there will be time in the coming month to properly recognize Commissioner Haas for his many accomplishments, I wanted to thank him for his dedicated service, his thoughtful contributions to my leadership team, and his unwavering commitment to the Cambridge community,” Rossi said.

Rossi is retiring at the end of June, making this a time of significant turnover for the city leadership.

Haas said he would begin transitioning his responsibilities – including such tasks as being one of three members of the License Commission – to an interim commissioner once the position is appointed by Rossi. “I have the greatest confidence that this transition will be seamless,” Haas said, citing the strength of his command staff leadership and rank-and-file officers.

“Each day, I have been continually impressed with the commitment, pride and talent of the men and women of this department, and I am extremely proud to have called you colleagues,” Haas wrote to his department. “I know full well that the department has never been stronger or more progressive than it is today. I take this step in the best interests of the department and the community I have become deeply integrated in and passionate for.”

“While this is an emotional and difficult decision. I leave knowing that CPD’s best days are ahead,” he said.

In his letter to the department, he also said:

What we have collectively achieved over a relatively short period of time has been nothing short of remarkable. We as an organization are recognized as a national leader in a variety of categories, including: the development and promotion of Police Legitimacy and Procedural Justice; a model of reform to the overall juvenile justice system; effective outreach to various vulnerable populations; and the department’s innovative use of digital media to connect and engage with our community. Furthermore, we have all gone through a transformation, which has significantly changed the cultural underpinnings of policing in going about building a community of trust and rethinking how it models the principles of police legitimacy as part of its internal practices. These accomplishments are so far in advance of others around the country that we are often regarded as pioneers in these areas.

Understand and appreciate the fact that you are an integral part of one of the most progressive police departments in the country and you will continue to have the support of the City Administration in terms of resources and assets to grow and flourish.