After recessing for 45 minutes for a closed-door session to discuss renewing the contract for their executive secretary, the committee returned, taking a quick vote on the unrevealed contract (five in favor, two against, with the executive secretary recording the votes) and there was an untelevised budget update from Superintendent Kenneth Salim and his staff.

But first, the meeting, with four Cambridge Rindge and Latin School students ostensibly speaking to support a vague motion by Patty Nolan and Kathleen Kelly that the committee “join the school administration in their work to ensure the safety and feeling of belonging for all groups in our schools.”

The students made an impact of their own. “I wanted to speak to you tonight about the recent events affecting our school community and how our school is addressing them,” senior Zoe Levitt said. Referring to instances of swastikas and other hate speech found at the high school since the presidential election, Levitt, who co-founded the school’s Jewish Heritage Club, said she has been disappointed at the lack of immediate and meaningful school response. “There was supposed to be a discussion in second-period classes,” she said. “Many teachers did not hold discussions.”

Levitt proposed an “X-block” for important discussions in homerooms – an X-block is an occasional period carved into the schedule, separate from other courses – and is spearheading such a schoolwide discussion period for Feb. 17. To accomplish this, she said, the students are asking the School Committee to support recognizing the X-block as academic time so the school still qualifies with the state-required hours for instruction. The upcoming X-block will be to educate students about the Holocaust and to “teach students to be ‘upstanders.’” Others in the year could be used to discuss the “Muslim ban,” racism and homophobia.

Senior Noah Epstein, part of the group working on the first meeting, said the periods should rightly be considered educational, since it is clear to him students lack knowledge about the “history of hurtful words and symbols” and their context. The X-blocks, he said, would reach all students “rather than just those who choose to take specific electives targeted at dealing with these issues.” Senior Milo Cason-Snow, saying that the swastika incident didn’t “directly affect him,” said he thinks “it’s important that the school community have an opportunity to discuss this after it occurs.” His second-period teacher, he said, did not raise it. Some students, he worried, “dismissed it as an outlier, something not really important to the school community.”

First-year student Maia Levitt told an anecdote of anti-Semitism at Vassal Lane Upper School, when a student mockingly repeated “there’s a Jew in the library” during an author visit of a daughter of a Holocaust survivor, as well as swastikas which she said were “never explicitly addressed by administration.” Her Jewish grandmother escaped Germany right before World War II, she said. Because of her family, her knowledge of the issues surrounding swastikas is deep. But so far, she said, she has “only addressed this one day in school” for her entire Cambridge education, and urged the committee to reexamine the middle school social studies curriculum and consider adding genocide study.

At the recess during the closed-door session, Principal Damon Smith joined some of the students and offered them support. “We could do a lot,” he said, suggesting that the X-block might be monthly or bi-monthly, but that he and they would need to focus on training teachers to lead specific discussions. 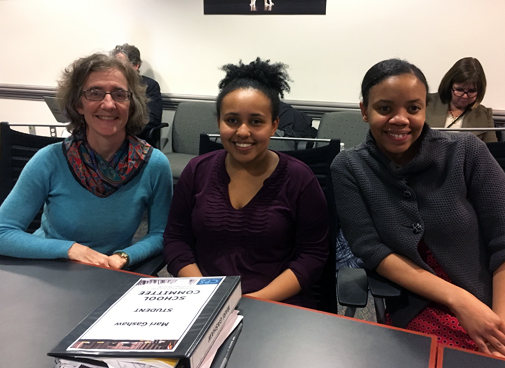 Committee student member Mari Gashaw was honored by a motion from Nolan and Manikka Bowman to “commend [her] for her leadership locally and nationally as part of the demonstrations for civil rights and justice for black lives.” The motion was sparked, Bowman said, by looking at her cellphone Jan. 21 to see Gashaw in a live feed in Washington, D.C., protesting the inauguration. “A lot of us don’t know what to do,” Bowman said. “I appreciate her courage.”

“I appreciate the School Committee for recognizing me,” Gashaw said, “and also the school district, because I’m a Cambridge kid and I wouldn’t be here if not for the schools.”

Fred Fantini offered a resolution to honor high school art teacher Elizabeth Menges and her Studio One students, in recognition of their “Urban Decay” mural at Lesley University. Fantini, clearly impressed and moved by the work, said of Menges, “she personifies what a teacher is about.”

Richard Harding read a page-long tribute to Renae Gray, a well-loved community member and activist from The Port neighborhood. He added comments, stressing her importance to young people in Cambridge, as did Mayor E. Denise Simmons. Bowman said, holding back tears, that “she is why I’m here,” explaining Gray’s encouragement to her to enter public life.

Emily Dexter congratulated the 40 CRLS students who earned Scholastic Awards for art and writing – 38 for art entries and the remaining two for writing, both earning honorable mentions. She also highlighted a $105,000 grant to the Rindge School of Technical Arts to buy equipment for a new biomanufacturing training program. After she spoke of its importance in career training, Fantini added his enthusiasm, followed by Bowman, who said “she was very excited when she read this.” Kathleen Kelly connected this to a recent Commonwealth Magazine article on the long waitlists for vocational education programs.

In public comment, Haggerty School teachers Elise Faucher, Meg Maloney and Patty West came to echo colleagues’ concerns at the previous meeting that an elementary world language program would be impossible to fit into their busy days. Although the topic was not on the agenda, Simmons politely guided the way to a suspension of rules to allow them to speak, a change in tone from some recent incidents.

The committee tabled a motion finalizing next year’s school calendar pending the final decision on identifying an October holiday as either Columbus Day or Indigenous Peoples Day, which the city has adopted. Members agreed to Salim’s suggestion that the dates can be posted in the meantime.

In addition to the RSTA biotechnology grant, the committee approved unanimously contracts of $49,000 for monitoring employee timekeeping and $27,500 for home-based special education services; a $2,650 grant for social emotional curriculum materials; and $3,400 for miscellaneous school-based gifts.

The committee also passed unanimously a motion by Harding to request a roundtable on the High School Extension Program. In public comment, staff member Crystal Johnson spoke against the motion, suggesting that work was underway at the school to address issues such as school climate and student achievement, as named in the motion. But members agreed that a roundtable was intended to become better informed and did not imply criticism.

Also passed unanimously was a motion to ask the superintendent to report back on the “status and schedule” of all principal evaluations and contracts, in addition to the Nolan/Kelly motion to support school “safety and feeling of belonging.” The committee calendared a motion to hear about program evaluation plans for Level Up, which affects ninth-grade English classes, pending the later presentation.

This post was updated Feb. 10, 2017, with additional information about the Scholastic Awards.