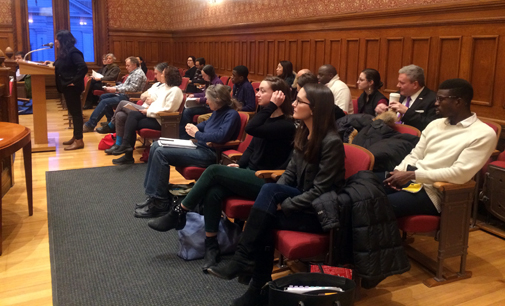 Members of the public speak Monday against a program that deputizes Cambridge police to act as though they’re federal immigrant agents. (Photo: Marc Levy)

A plea by the American Civil Liberties Union of Massachusetts to halt a controversial collaboration between state and local law enforcement and Immigration and Customs Enforcement won unanimous support from the City Council on Monday.

According to the section of the Immigration and Nationality Act for which the program is named, in participating states an officer or other employee “who is determined by the attorney general to be qualified to perform a function of an immigration officer” can carry out that function at the expense of the state “or political subdivision and to the extent consistent with state and local law.” It includes investigating, arresting and detaining immigrants – a role at odds with Cambridge’s stance as a sanctuary city for undocumented immigrants.

Jeremy Warnick, director of communications and media relations for Cambridge police, has said the department limits cooperation with the federal government to “scenarios involving high-risk offenders.”

The policy order, cosponsored by vice mayor Marc McGovern, Mayor E. Denise Simmons and councillor Nadeem Mazen, was passed after only a few minutes of discussion.

Mazen noted the resounding support for the order expressed during public comment, calling the order “noncontroversial.”

Several residents spoke out against the program during the public comment portion of the meeting.

Kim Quarantello described the program as expanding a “flawed and obsolete method of immigration enforcement” that would “undermine trust in law enforcement agencies,” encourage racial profiling and drain resources. Sylvie de Marrais, a team lead at the city’s independent Immigrant Advocacy Group, spoke to the importance of prioritizing community safety and relationships as reasons for ending involvement with this program.

Since the election, McGovern said, “it’s not enough to just say we’re a sanctuary city,” referring to the fact that in Cambridge, citizens cannot be deported on the grounds of their immigration status alone. “We have to resist and push back against the hatred that’s coming out of the White House.”

Councillor Craig Kelley echoed this, saying, “We will not be deputized to do ICE’s work.”