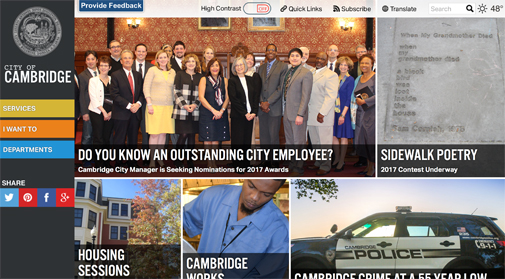 The City of Cambridge released its website redesign Wednesday, more than two years after it announced the overhaul process.

The new design uses most of the screen “real estate” for large photos with large headlines; it unifies the mobile and desktop designs and works on smaller screens: Instead of trying to pack most information in the top of the page, it is expected that users will scroll down. The previous version had a single large photo and devoted the rest of the space to links to city information, packed in with small type. The new site offers three prominent menus of items accessible on the left side: “Services,” “I want to …” and “Departments.” But it is necessary to hover the mouse or click the menu to get to the menu contents, unlike the previous site, which offered direct links.

City officials and citizens seemed underwhelmed by the site Wednesday, with one official jokingly saying, “It is very colorful …” and suggesting the work should have been done faster; “not ready for prime time,” said another. Others wondered how to get to information that was previously available but now is not in the same place, if anywhere at all.

Unlike some website redesigns, this one appears not to have broken any longstanding links. 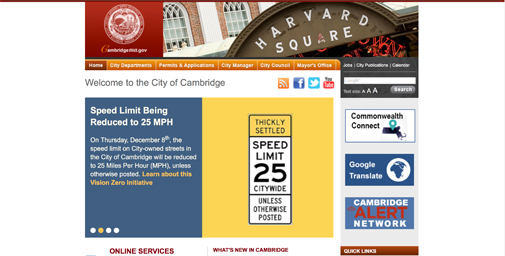 The previous version of the site.

The City has been uncharacteristically cagey about the rollout process. In September, Director of Communications Lee Gianetti said the site was expected to roll out in early October, but has since been silent. In October he said there was “no definitive timetable,” and by mid-January, “there is no timetable or draft timetable.” Around this time, the City Council passed a policy order requesting a status update, and Gianetti declined to share more information with the press before it was given to the council, saying, “An update and a timetable will be included in our council response.” That response has not come.

Gianetti said Friday that the website cost about $200,000. The city paid $95,500 to FuseIdeas, a Boston design firm, to create the user experience and design of the website. It also contracted with Velir, a Somerville Web technology firm, for $94,500 in additional development work that will be deployed “after we clean up any issues associated with the launch.”

Gianetti did not respond to a Jan. 23 question about the website’s management team; in a response to a public records request, city attorney Paul Kawai wrote, “Under the public records law, the City is not required to answer questions, and the City declines to answer such questions.”

But Kawai was wrong: The request sought records that addressed the project management of the website project. Requests for records that answer questions are allowed under the public records law, even if questions are not. Kawai ignored repeated requests that he explain, until on March 3, he claimed without foundation that the requested has been “superseded” by a Jan. 25 request for memos and presentations (but not emails) about the website. Kawai at first said it would cost more than $200 for a year’s worth of memos. In response to a reduced request for memos since October, Kawai estimated a $75 fee but has not yet produced anything.

Furthermore, Kawai has petitioned the state Supervisor of Records this morning for permission to charge for the time it would take to redact “password and security information related to the city’s new proposed website, which is part of the city’s digital security infrastructure that is in place to safeguard highly secure, confidential and sensitive information.” This is Kawai’s second petition to charge fees to remove website passwords from presentations and memos about the new site. Kawai did not respond to a Feb. 8 suggestion that the city should not be storing sensitive passwords in presentations, and that the best remedy is to simply change passwords instead of spending hours redacting them.

“What the hell are they doing transmitting password via email, putting them in PowerPoints and memos?” asked Saul Tannenbaum, an information technology expert and member of the city’s Municipal Broadband Task Force.

The City’s internal announcement for the website highlights its “new navigation structure that allows search to search for information by department, service name or by the action they want to take.”

The city touts the mobile-friendly nature of the site: a “responsive design that adjusts layout of website so it is optimized on any device and screen size.”

There is a “‘time stamp’ on the bottom of each page so users will know when page was last updated.”

The announcement says that Wednesday’s launch “primarily impacts 25 departments, so not all City departments will appear in the new design.”

At the same time as the main website rollout, the city also updated its listing of the membership of city boards and commissions, moving them to its legislative database website used for the City Council since 2016.

The website allows viewing of the membership of boards and commissions all in one place, along with the charter of each commission, and, for most, a link to minutes.

Clicking on an individual member allows viewing their history of commission appointments. It also has a “View Member’s Votes” feature, but that feature works only for the nine elected city councillors. For the hundreds of other board members, it shows nothing.